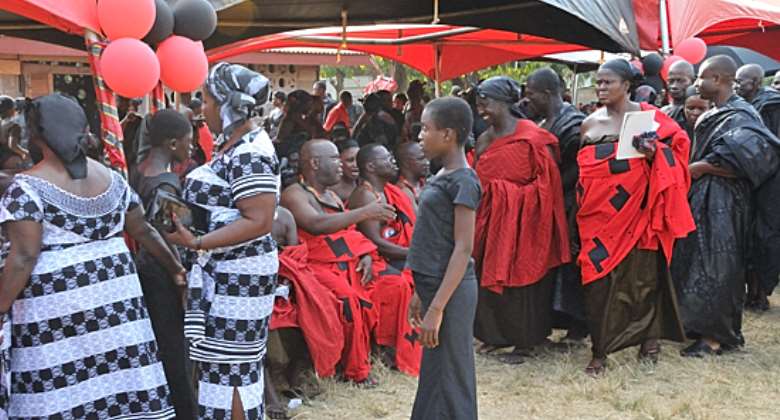 This brief post is my input to critiquing Ghana and Africa's penchant for financially expensive funerals and worrying preoccupation with dead bodies.

The recent death of former Vice President, Aliu Mahama has caused some oppositional political ideologues to also ask for his state funeral. This is ridiculous as he was a Muslim and needed, by religious edict, to be buried quickly. This, of course, has come at the heels of the late Pres. Mills' state burial earlier this year.

It is now proving abhorrently obvious that the Akan cultural predilection for keeping cadavers for months in mortuary fridges in order to organise unaffordable expenses for sumptuous funerals, has become fashionable at the level of state!

It was such an emotional pug-wash to read thousands of insincere 'condolences' pouring from football clubs, mobile phone operators, women's groups, NGOs, foreign embassies, school children, and even malevolent NPP politicians . We are reminded while the good professor was reading his State of the Nation Speech, NPP MPs heckled and hooted him down cacophonously, while they wore taboo black and red funeral cloths that was symbolic of a dead-president-talking!:

'As usual, his address in Parliament was not without incident as it was characterized by much heckling from the Minority who repeatedly sang 'Woyome Woyome Woyome, gargantuan oo munkye-ndi".

President Mills, who was equally calm despite the attitude of the Minority, in a lighthearted manner remarked at the end of the address, 'even though I expected to be heckled, I did not expect the heckling to be so gargantuan.' However, more drama was to follow as no sooner had the president finished his delivery, than all the Minority members, clad in black and mourning what they called the moribund state of the nation, jumped to their feet waving red cards and chanting; 'a-w-a-y, a-w-a-y, a-w-a-y'.' (NPPs Reaction To Mills' State Of The Nation Address, Date: 16-Feb-2012, Source: Rebecca Addo Tetteh/Peacefmonline.com).

This is my take. Ghana state buildings must not be turned into funeral homes where, at the drop of a hat, every notable politician who dies gets a state burial. Only Vice Presidents and Presidents WHO DIE IN OFFICE must be accorded state funerals. We did not vote politicians into parliament to cost us funerals! They must go and die somewhere else before thinking of a political career!

Humour aside, we can limit the possibility of such preventable occurrences. To avoid in-office deaths, I have already posed a counter argument on these walls, offering coherent arguments for entry into parliament to be capped at 21-55 years of age.

All other prominent nationals who die must be treated as everyone else. The state must simply accord the necessary condolences to their families - one assumes they have families - end of matter. Presidents and their vices that die while in office must be quickly buried in their home towns. Expensive mortuary fridge space, public health and common sense, demands the dead are disposed expeditiously.

At all costs we must avoid the false cultural trap of making every death an occasion for jollification: eating, drinking, womanising, 'manising' and trading in false emotional platitudes have more to do with bacchanalia than national development.