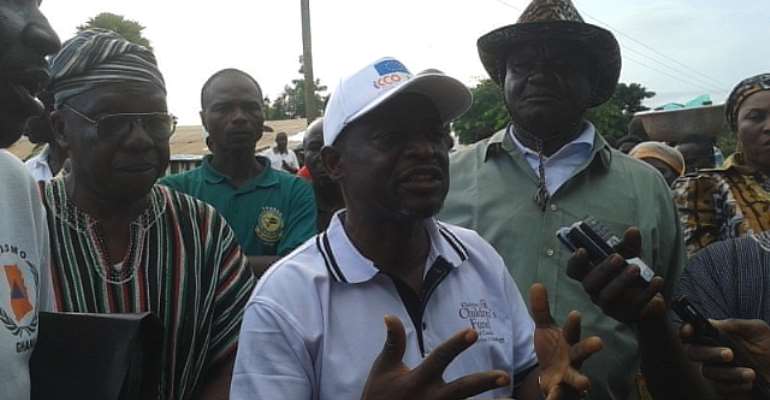 The Deputy Northern Region Minister, Hon Alhaji A.B.A Fusieni, who doubles as the Member of Parliament for the Sagnarigu Constituency in the Tamale metropolis has presented relief items to the victims of the recent territorial rains in the Bunkpurugu/Yunyoo District.

The Minister explained that, he is standing in for his Boss the Northern regional Minister, Hon Bede Zedeing and for the matter the president of the republic of Ghana His Excellency John Dramani Mahama. According to the Minister government saw the need to come and study what perturns on the ground in other to response according to the needs of the people.

He however thanked the victims, chiefs and residents of the area, for the patience and unity they stood as one people to accommodate some of those who are homeless as a result. These items are made available through the efforts of Nadmo, Goil Ghana and the Bunkpurugu/Yunyoo District Assembly. Minister added.

The District Chief Executive of the Bunkpurugu/Yunyoo District, Hon Philip N, Laari, thanked the, Minister for coming. He added that, President John Mahama is a lestining president and that, is why it took government only some few days to response to NADMOs reports.

Hon Philip disclosed that, these items are amongst other relief items which government is planning to support the victims. The DCE, further thanked GOIL Ghana for supporting the District with relief items. He appealed to other institutions to support the District, considering the level of destructions that occurred during the floods. The DCE took the opportunity to assure the gathering that, the road from Binde through the District capital Bunkpurugu Togo Boarder would be constructed after the rains stop. He advised the victims and the communities affected to consider laying rocks/blocks foundations before putting up their homes. Most of you build your homes very close to the rivers or along big garters/drainage areas; we must stop this because we are endangering ourselves. DCE expressed.

Mr. Wuni Sugri , who is the District coordinator for Nadmo , said as at 29 of August when the floods occurred to date, his outfit had recorded, 971 houses affected district wide, 7,434 persons affected and 5 government schools, 2 churches and many properties . Other areas include several Farmlands, community Feeder roads, and the Binde-Bunkpurugu main road.

I want to add that, we still have people who come to the office to register their homes, this is because we still get heavy down pour of rains in the area, Wuni Sugri mentioned. I sincerely want to thank the President and the NDC government for items which has been brought. While we still appeal for more especially for the much affected communities .Wuni Sugri noted.

Distribution started at Najong No2, one of the affected communities and would continue by the committee seeing to the distribution.

The Minister ,was accompanied by the Northern region Nadmo coordinator Alhaji Silimboma Naa, his staff and the Bunkpurugu/Yunyoo DISEC members.