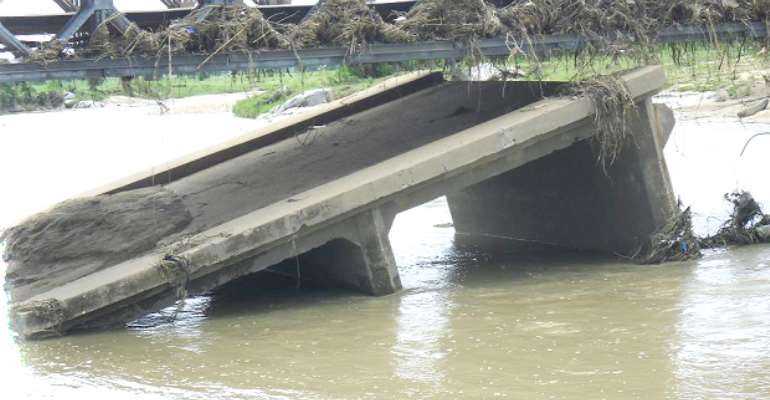 The Kulungugu Bridge which serves as a link between Ghana and Burkina Faso is in danger of collapse.Some of the panels supporting the bridge have broken down, allowing portions of it to sink.

The Kulungugu-Bawku road serves as one of the major entry and exit points for commercial goods from and to Burkina Faso, and the collapse of the bridge will have a deleterious effect on trade between the two countries.

The state of the bridge came to light when the Deputy Minister of Roads and Highways, Mr Isaac Adjei Mensah, and some officials of the ministry visited the area to inspect roads and other facilities.

The visit by the deputy minister formed part of his five-day tour of the three northern regions to inspect some of the roads there following reports that some of them had been washed away as a result of the recent heavy rains.

Mr Adjei Mensah said the best way to avert the total collapse of the bridge would be to restrict the movement of heavy duty vehicles over it.

'But in view of the strategic location and the significance of the bridge to both Ghana and Burkina Faso, it is important to consult all the stakeholders, including the Ministry of Foreign Affairs, the Burkina Faso Embassy and the Customs Division of the Ghana Revenue Authority, before a decision on how to use the bridge without compromising safety can be taken,' he added.

The Deputy Upper East Regional Minister, Mr Daniel Syme, who accompanied Mr Adjei Mensah and his team on the tour to Kulungugu, said the Regional Co-ordinating Council, together with the Pusiga District Co-ordinating Council, would collaborate with the Ministry of Roads and Highways and all stakeholders to find a solution to the collapsing bridge.

Earlier, the deputy minister and his team had visited the campus of the Bolgatanga Polytechnic and later inspected a bridge at Nyariga, near Bolgatanga.

He also inspected work on the Bolgatanga-Bawku road and a bridge at Kpantarigo which links Gumbo and other communities with Zebilla.