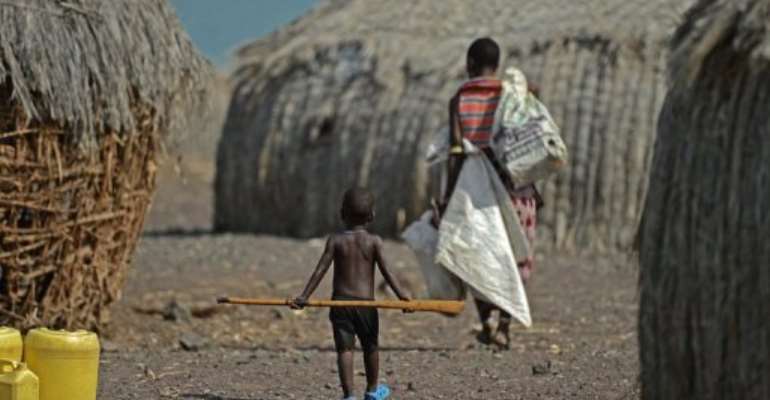 A mother and child walk in the village of Komote on the shores of Lake Turkana, northern Kenya on May 18, 2012. By Carl de Souza (AFP/File)

NAIROBI (AFP) - The Kenyan government and UNESCO on Wednesday announced the discovery of a potentially vast supply of underground water in the impoverished, drought-stricken extreme north of the country.

The find, made using advanced satellite exploration technology and backed up by UNESCO drilling, was hailed as a scientific breakthrough that could radically change the lives of the half-a-million people living in one of the world's most arid regions.

Two aquifers -- or underground layers of permeable rock or silt soaked in water -- were found in the Turkana region, the scene of a devastating drought two years ago that aid workers said pushed malnutrition rates up to 37 percent.

"The news about these water reserves comes at a time when reliable water supplies are highly needed," said Judi Wakhungu, cabinet secretary in the Kenyan ministry of environment, water and natural resources.

"This newly found wealth of water opens a door to a more prosperous future for the people of Turkana and the nation as a whole. We must now work to further explore these resources responsibly and safeguard them for future generations," she said at the start of a water security conference in Nairobi.

The region, near the northern border with Uganda, South Sudan and Ethiopia, is the poorest in the country, and its people -- 70 percent of whom are semi-nomadic working the hostile and desert-like environment -- are among the most vulnerable on the continent.

Of Kenya's 41 million strong population, 17 million lack access to safe water, and 28 million do not have adequate sanitation.

UNESCO cautioned that further studies were needed to determine the exact size of the Lotikipi Basin Aquifer, located west of Lake Turkana, and the Lodwar Basin Aquifer, which could feed the regional capital of Lodwar.

The UN organisation said water quality also needed to be assessed, and that it was seeking to confirm the presence of a further three aquifers in the region.