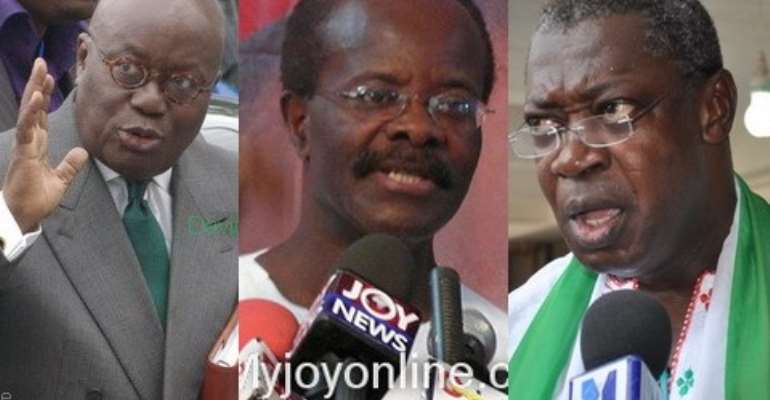 Instituting “Legacy Projects” for the three, according to the organisation, "is a first sound step to uniting the nation for development".

A statement issued in Accra by CeDI-Ghana said, the suggestion was in furtherance of the efforts to deal with the prevailing "winner-takes-all" political system which was poisoning the political, social and economic environment and undermining the country's peace and development.

The think tank says formulating legacy projects for the presidential candidates of the New Patriotic Party (NPP), and the Progressive People's Party (PPP) in the 2012 elections, Nana Akufo-Addo and Dr. Papa Kwesi Nduom respectively, as well as Prof. Agyemang Badu Akosa, a former Director General of the Ghana Health Service was a perfect beginning to redirecting the nation's energy to development.

"The unanimously accused 'winner-takes-all' nature of politics, the acrimonious style of politicking, and other suchlike retrogressive factors will keep Ghana underdeveloped unless a pragmatic approach is found to engage the energies of every capable Ghanaian to build a 'great and strong' nation as our national anthem enjoins us to do," the statement said.

"By our concept, eminent citizens of the country who have demonstrated the willingness to serve in the public space but may; (1) be unwilling to take up a political position (2) be unable to realize political aspirations (3) have finished serving political terms but have enough energy and willingness to do more for Ghana, can be awarded projects geared towards solving some of Ghana's urgent challenges".

The think tank said the true stories surrounding those projects should be properly documented and credited to the persons who spearheaded their implementation.

According to CeDI-Ghana, projects such as eradicating particular diseases, solving specific problems in the education sector, community development, and research into relevant issues, should be assigned to each of the eminent persons.

The person who is awarded the legacy project could use his international influence to secure funding for the project or alternatively the nation could institute a Legacy Project Fund, from which funds could be drawn to sponsor those projects.

The United Nations, Africa Union, and other international bodies have been engaging former presidents in similar projects around Africa and the world.

"Ghana, our motherland can benefit tremendously in this direction as well. CeDI-Africa is willing to assist with guidance on institutionalizing this concept".

We're ready to go to jail for fighting the bogus, discrimina...
51 minutes ago