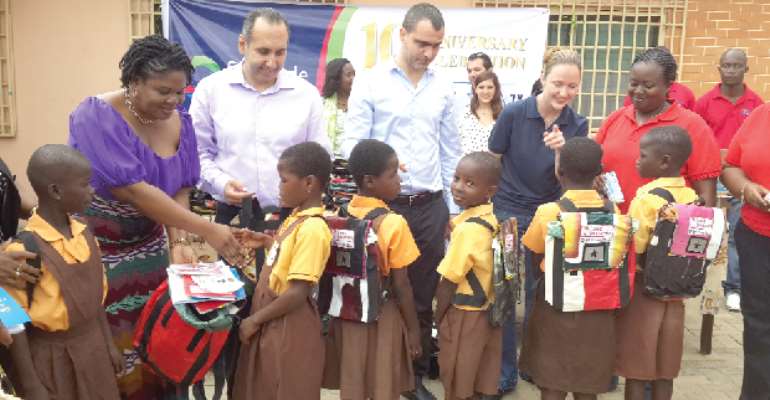 The Finatrade Foundation, the charity wing of the Finatrade Group, yesterday presented 1,000 schoolbags and stationery to Class One pupils in 18 basic schools within the Ledzokuku-Krowor Municipality.

The presentation formed part of activities marking the 10th anniversary of the foundation, established in 2003 to provide support for the needy and vulnerable in society.

The schoolbags were produced under the Ghana School Bag Project, a project that recycles waste materials into schoolbags.

The beneficiaries were also presented with beverages.

Presenting the items, the Director of Human Resource of the Finatrade Group, Mr Elias Daher, said the presentation was a way of showing appreciation to members of the community in which the company operated.

'We recognise our immediate environment as being key to our success story as a company, as well as the peaceful atmosphere we have enjoyed which has brought the company growth and expansion,' he said.

Receiving the items, the Ledzokuku Municipal Director of Education, Madam Rosetta Addison Sackey, thanked the foundation for the support.

She said the items would serve as a form of motivation to the pupils to attend school and also take their education seriously.