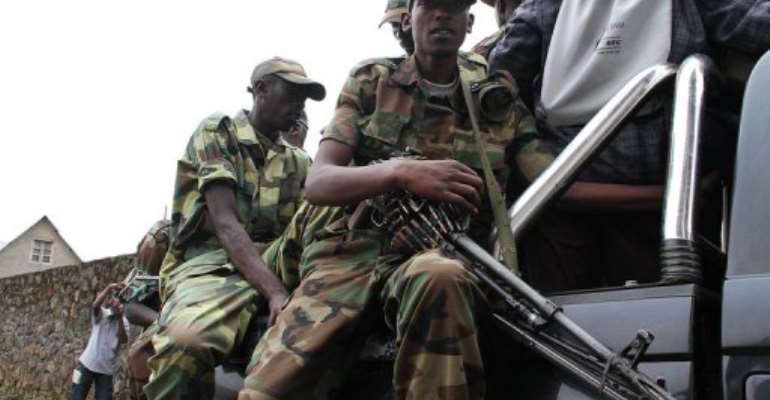 M23 rebels patrol the streets of Bunagana, on January 3, 2013. By Isaac Kasamani (AFP/File)

The two sides are meeting for the first time since talks stalled in May, and follow a recent upsurge in fighting in the resource-rich east of DR Congo.

"The peace talks have resumed and we expect to make a lot of progress," Ugandan defence minister Crispus Kiyonga said, who is chairing the talks at a lakeside resort near Kampala.

Last week leaders of Africa's Great Lakes region set a three-day deadline for talks -- that expired Monday -- to resume between the M23 army mutineers and Kinshasa.

The talks, which began in a closed door meeting with Ugandan mediators, should be concluded within 14 days.

However, previous rounds of talks were repeatedly delayed.

The M23 was founded by former Tutsi rebels who were incorporated into the Congolese army under a 2009 peace deal.

Complaining the deal was never fully implemented, they mutinied in April 2012, turning their guns on their former comrades and launching the latest rebellion to ravage DR Congo's mineral-rich and conflict-prone east.

The UN and various rights groups have accused the M23 of atrocities including rape and murder in a conflict that has caused tens of thousands of refugees to flee.

The UN also accuses Rwanda of backing the M23, a charge the country has adamantly denied.

The rebels for their part have accused the Congolese army of joining forces against them with the FDLR, or Democratic Forces for the Liberation of Rwanda, which is also active in eastern DR Congo where its members fled in the wake of the 1994 genocide in Rwanda.