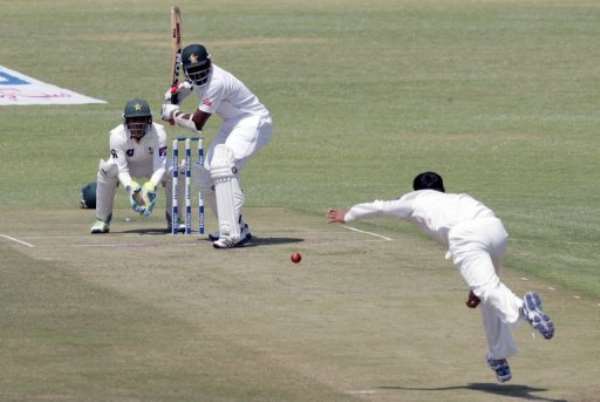 HARARE, Harare Province (AFP) - Hamilton Masakadza and Brendan Taylor shared a century partnership as Zimbabwe recovered from the loss of two early wickets on the first day of the second Test against Pakistan at Harare Sports Club on Tuesday.

Zimbabwe, beaten by 221 runs in the first Test at the same venue last week, were 165 for three at tea. Masakadza made 75 while Taylor was on 48 not out. They added 110 for the third wicket.

The pair came together after Zimbabwe lost their first two wickets for 31 runs.

Tina Mawoyo was caught behind off Junaid Khan without scoring off the second ball of the match after Taylor won the toss and decided to bat.

Vusi Sibanda battled to 14 off 44 balls before dragging an attempted pull against Rahat Ali on to his stumps.

Masakadza, who captained the team in the first Test when Taylor withdrew because of the birth of his first child, batted solidly as he reached a half-century off 98 balls, taking advantage of any loose deliveries to hit eight fours and a six.

Taylor, by contrast, looked out of touch early in his innings and was given a torrid time by left-arm pace bowler Junaid. He scored only seven runs as the partnership became worth 50 but he played with more fluency to contribute 32 of the next 50. He had faced 112 balls by tea.

The partnership was ended by off-spinner Saeed Ajmal, who deceived Masakadza with a 'doosra' to have him caught at slip. He faced 169 balls and added only one boundary after reaching his half-century.