The Ordinary Man’s Revolution Is Knocking At Our Doors 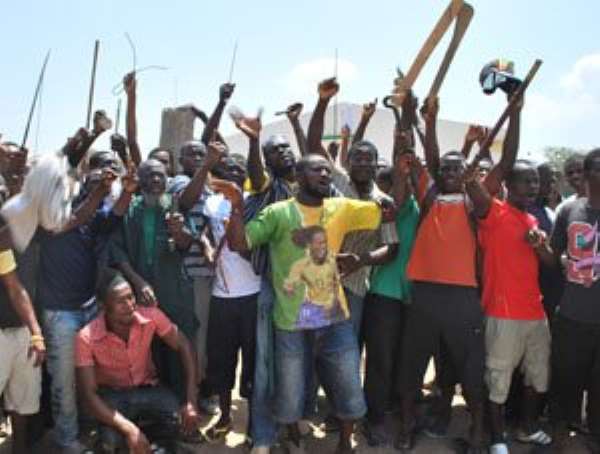 There is a time for everything. This scripture found in the 3rd Chapter of Ecclesiastes of the Holy Bible has its counterparts in the Holy Koran and other religious books. Therefore, those who continue to pin down the ordinary people in their societies had better thought twice.

We can continue to ignore the handwriting on the wall. But a time is coming and indeed very soon, when the ordinary man who is not respected and taken for granted would fight back. Many examples of what I am referring to abound in history so if the wealthy ones are pretending they have no idea of such experiences, then they are most miserable.

Five years under the NDC government, the ordinary man has been complaining bitterly about how deplorable his condition is and the dangerous manner he lives. But the more he cries out for help the more he is asked to tighten a belt that has no space for perforating another hole in it. The fact of the matter is that the unworkable policies of the government are further impoverishing the ordinary man. The government has delayed and watched signs of incipient unrest and have now been overtaken by events. Sadly, those in power are blinded to the suffering of the poor.

Our clinics, hospitals and other healing centres are full to the brim with sick people because of one basic fact. Majority of Ghanaians eat once a day. What they describe as food lacks the necessary nutrients. The present state of the National Health Insurance Scheme (NHIS) is problematic. Holders of NHIS cards are either treated contemptuously or given different drugs from what the doctors prescribe. Abuse of the scheme is massive and yet because it affects the ordinary man no one is critically investigating to expose those working hard to collapse it. Who are the unpatriotic citizens of the land at the Central Stores of the Ghana Health Service siphoning drugs to drug houses and private clinics? But for natural medicine which is minimizing the high incidence of deaths from the otherwise preventable diseases plaguing the ordinary man disaster would have struck.

We are only looking at figures of motor accidents but those who die of preventable diseases in a day run into hundreds. Why are our mortuaries overburdened and an average of seven persons buried weekly in towns and villages these days? The scenario at the cemeteries in Accra and the regional capitals is frightening. I remember attending a funeral in Asante Akyem where seven people were to be buried that day. The worried chief who could no longer stomach the suffering of his peoplefuneral expenses and wake-keeping, decreed that he would not tolerate more than four funerals in town at weekends.

With escalating prices all over the place the ordinary man finds himself in an awkward situation. No matter how his wage is increased he is worse off because the system is just not working. The so-called Fair Wages and Salaries Commission (FWSC) is composed of a chief executive and directors who rudely talk to workers as if they themselves are not employees. Meanwhile, they are enjoying fat salaries and allowances. Many workers walk from their houses to work because tro-tro drivers break journeys which results in the payment of double fares. The MTTU and the transport unions give tacit approval to such illegality. High price of premix is a big headache for those in the fishing industry. Those who borrow money to fuel their boats are often indebted. After all the hustle the catch sometimes goes to waste because their customers who are predominantly low income earners cannot afford.

Have the Ministry of Education and the Ghana Education Service bothered to find out how many school children are dropping out these days? Parents are unmercifully loaded with unreasonable levies by school authorities who are not getting Capitation to operate. When they struggle to keep their children in school, the embattled caterers under the School Feeding Programme serve the pupils with low quality food. The dishonest officers of the programme who condone and connive with some head teachers and caterers to inflaate figures submitted for payment is inexplicable. Added to the insult is certain head teachers looking on as pupils are used for washing bowls and dishes after eating.

Against all difficulties, the ordinary man pulls himself together and sees his children through junior and senior high school education only to be confronted with the inability of the children to get admission into tertiary institutions. The unlucky ones engage in all sorts of vices. The girls become pregnant while the boys and some girls indulge in pick-pocketing and armed robbery. We also have those that apply for courses at the training institutions and pass out as teachers, nurses, technicians etc. They are employed but work for over a year without receiving salaries and so fall back on their parents financially.

Let the ordinary man breach our laws and the type of sentence imposed on him is sometimes unbelievable. At the police station he is hurriedly pushed into cell because he has nothing to offer as bribe.

His world is turned upside down when fire guts the market where he does his petty trading. The task force of the metropolitan assemblies subject him to brutal assault and confiscates his wares. While the ordinary loses his capital members of the task force are protected by their bosses.

His landlord increases the rent arbitrarily and ejects him because he cannot pay. He ends up in an uncompleted building. A couple of years later the area undergoes steady development so the owner gives him two months notice to look for an alternative accommodation. He seeks refuge with another ordinary man who has a wife and four children.

He works for decades but on retirement his social security benefits can barely pick transport fare to convey him and his family to the village and see him through the next six months. Many have died of frustration and despair.

At church the ordinary man pays his tithes and offerings but prosperity smiles only at the preacher and his family who acquire big houses and cars though the ordinary man wallows in abject poverty. Then he joins a political party and votes for the politician with the promise that his children will be better off. When victory is won he is told in plain terms that all will be well and so he must exercise restraint.

The ordinary man walks across the Sahara desert until he finally makes it to Europe. He returns home with a car to sell and raise capital. At the port the bureaucracy is such that a penalty is imposed on him. He has no money to pay and the car is taken away from him.

He is full of anger. Tears of anguish have filled his eyes. Demonstrations are planned to help him express his displeasure about the disconnect from the ruling class. But the police cunningly secures a court order to stop the protest. He sees a system that is perpetually making him a pauper. He does not want his children to inherit this fate. Therefore, he is ready to sacrifice and change his status. The rich mock and scoff but the ordinary man sees freedom beckoning him to the promise land. Signs of victory are tempting and compelling. 'Nothing can stop me' he says. 'I will fight for freedom', he vows.