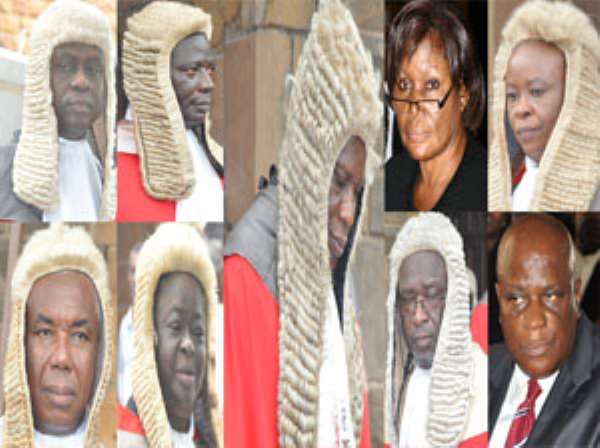 When one of the judges in the landmark petition hearing suit described it as a political case, the import of the remark was hardly interrogated.

Cases labelled political as a police officer once described one before him are, it would seem, exempted from the rules of logic and confuse observers who try hard to make sense out of the judgments thereof.

The police officer in question, after tagging the case of thugs doing the criminal bidding of a politician whose party is in power, conveniently turned his attention away from it, not ready to be transferred to a remote part of the country as punishment.

Another judge on the panel said that at the end of the case, elections in the country would never be the same again. Yes, of course, Ghanaians will henceforth go into elections ready to do all that it takes to have their way at the polling stations because after all, political cases have no place in courts.

The judgments from the Supreme Court judges continue to stir discourses not only among legal academics but within circles of laymen in the streets.

Scholars of constitutional law will have a lot to brood upon as the import of the varied judgments sink in against the backdrop of the rumours upon which these are unfortunately hinged.

It is over a week now since the judgment was delivered and the story about how many judges on the panel are vacationing in the US even before their compatriots in politics do so, is rife.

Viewed against the backdrop of how one of the learned men remarked that some politicians have their travel documents ready for the next available flight when things get messy, Ghanaians can only wonder at the irony of the development.

Elsewhere in this edition, the Minority in Parliament have demanded that the justices currently vacationing outside the country return to dissect the critiques of their judgments by their compatriots.

One of the judgments states that there are instances where the law is immaterial. This is doubtlessly a reference to election cases or better still political matters.

Perhaps, this and other factors are responsible for the seemingly erroneous impression by skeptic Ghanaians that election cases have no place in the courts. Unfortunately, this has been accentuated.

Those who argued that once a President is sworn into office, regardless of the infractions which went into the electoral process and the breaches of the relevant Constitutional Instruments, the Supreme Court cannot annul the polls can celebrate the anomalies.

Need we bother our heads with laws to govern elections in the country when these have no place in the court of law?