MOHINANI DONATES TO THE POLICE AND FIRE SERVICE 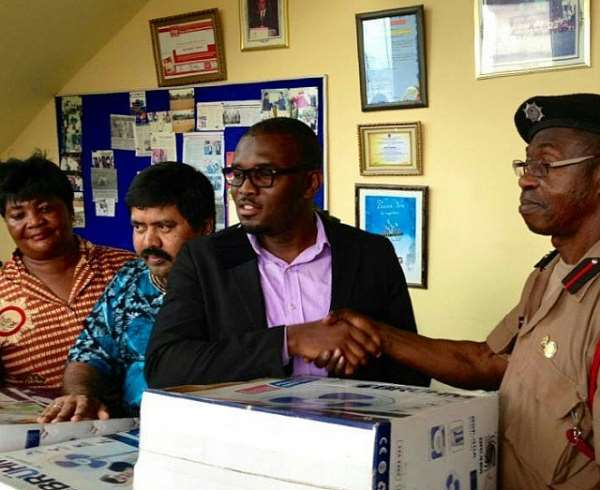 Mohinani Group of Companies has donated electronic items worth GHC 6000.00 to two public security institutions to enhance their operations.

The two institutions were the Kaneshie Police Station and the Ghana National Fire Service [GNFS] who were presented with a generator and 36 standing fans respectively.

Presenting the items to the two institutions last Friday at their Head Office in Accra, Mohinani Corporate Affairs Manager, Mr. Gabriel Opoku Asare describes the work of both institutions as very key and relevant to the socio- economic development of the country.

He commended the Ghana Police Service for its pivotal role in ensuring peace and order in the country which has helped made Ghana a safe haven for investors and businesses.

The generator presented to the Kanaeshie Police Station at a cost of GHC 2000.00 he said was in response to an appeal made by the station for a generator adding that they were quick to respond because of the important role the Police plays in the society.

Mr. Asaare further promised that Mohinani Group will continue to support the Police Service so that they continue with the good work they are doing especially the Kaneshi Station where Mohinani's Head Office is located.

In response, an Officer from the Kaneshie Police Station thanked Mohinani Group for the kind gesture done them and promised to put the item to good use and for the purpose it was presented for. He also called on other corporate bodies to come to the aid of the Police Service.

He pledged to uphold the healthy relationship between Mohinani Group of Companies and the Police as well as other Security Agencies in the country to ensure a peaceful environment for businesses and investors.

In support of the Ghana National Fire Service's [GNFS] National Fire week celebration which begins this week, the Company also presented 36 standing fans worth GHC 4000.00 to the Service.

Also, Mr. Asare commended the GNFS for its contribution towards the socio-economic development of the country adding that an effective and efficient Fire Service is a good insurance to Ghana's valuable investments.

The efficient operation of the GNFS is important to the Group. The Industrial, Hospitality and Consumer retail sectors can be assured that their factories, hotels; retail shop will be protected from the ravages of fire.'

He said the activities of the GNFS is very important to the Group as its Industrial, Hospitality and Consumer Retail Sectors is assured of fire free environments and that Mohinani as a good corporate citizen is committed to supporting Public Institutions like the GNFS to operate efficiently.

In his response, DO 2 James Oheneba Kwarteng, on behalf of the GNFS expressed his appreciation to the Mohinani Group. He used the opportunity to outline the program lineup for the week-long fire week celebration to be held under the Theme: Fire Safety the Role of The Citizenry.

The launching of the celebration will take place on Monday 10th September 2013 at the Accra International Conference Center to be followed by float in some principal streets of the nation's capital Accra on Tuesday, 11th September.

On Wednesday, there would be safety inspections by the Fire personnel of some private and public institutions in the country where those found culpable will be warned and educated on the necessary fire safety precautions.

He announced that there will be a fire safety forum to be held in Accra as part of the celebration on Thursday the 14th of September 2013 whiles the weeklong celebration will be climaxed with fun games.