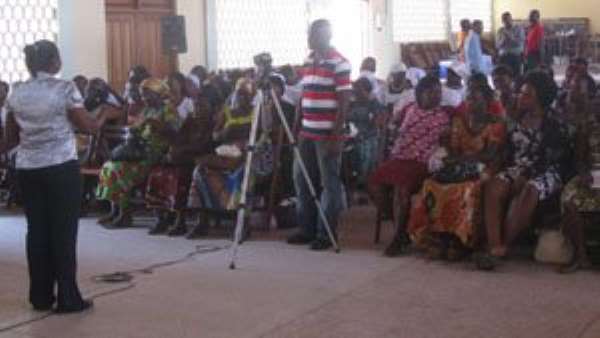 Over 30 marriage certificates have been confiscated this year by the registrar, compared to the over 50 during last year.

Angela Dzisenu, Ashaiman Assistant Marriage Registrar noted this when she was speaking at the second edition of a two-day workshop organised by the Ashaiman Department of Community Development for women in the Ashaiman Municipality.

She noted that about half of Ashaiman marriage certificates which were issued by non-traditional churches or 'one man churches' were found to be invalid. She accused smaller church officials of failing to take sufficient steps to stop 'bogus marriages' which often ended up in divorce.

Mrs Dzisenu enumerated, 'it's advisable to find out whether the church you are planning to wed is licensed so that you do not to lose at the end.'

According to her, during the issuing of marriage certificates, some churches seek the services of graphic designers or purchase forms from the stationery shops which do not have security features of the original certificates. She therefore cautioned couples to take the necessary steps to verify their certificates.

The Ashaiman Assistant Registrar called on the public to report suspicious marriages to the Marriage Office for onward actions to be taken. She added that the requirement for civil marriage include the intending couple appearing in person for a consultation before the Registrar of Marriages, who shall then approve the notice of marriage to be put on the notice board.

Mrs Dzisenu explained that after satisfying the registrar with the basic requirements, the intending couple fill in the notice of marriage and witness forms, then finally pay the necessary fees as determined by the registrar.