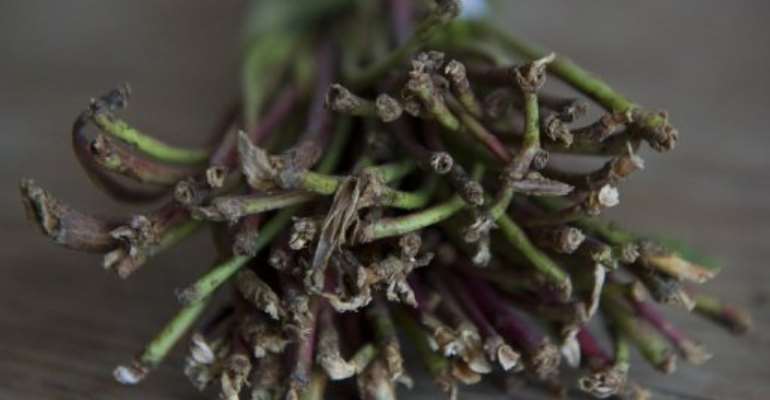 A bundle of khat, a flowering plant which contains an amphetamine-like property, pictured in London on February 28, 2013. By Carl Court (AFP)

LONDON (AFP) - When Britain bans the herbal stimulant khat, Mohamod Ahmed Mohamed will lose his livelihood. But he fears most for his small Somali community without the leaf that fuels its social life.

"I can switch to another business but what about the youth, where are they going to go -- the street, the mosque, to hard drugs?" he says at his khat warehouse near London's Heathrow airport.

"You are taking away their freedom. Why target us? You will never find somebody falling over on the street or fighting from khat like they do when they are drunk."

Mohamed supplies khat to many of Britain's 100,000 Somalis, as well as to Ethiopians and Yemenis living here, for whom chewing the bushy shrub is as normal as going to the pub.

But the forklift trucks moving hundreds of boxes of khat could soon be stilled after the British government announced it would ban khat, against the advice of its own experts.

News of the ban, which has yet to pass through parliament, came as a shock to the communities who chew khat in Britain.

Khat, also called miraa, has been chewed for centuries in the Horn of Africa. Its psychoactive ingredients, cathinone and cathine, are similar to amphetamines but weaker, and can help chewers stay awake and talkative.

One of his workers chimed in: "It's not a drug. It's like eating a salad."

Since khat must be chewed fresh, Mohamed's is a slick operation.

Khat is flown to Heathrow from Kenya the day after it is picked; middlemen collect it from Mohamed to sell around the country and it can be in the mouths of chewers by evening.

At a mafrish near Mohamed's warehouse, men chew and drink soft drinks, watch football and discuss events in Somalia and their jobs in London.

"I don't go to nightclubs, I don't want to stay home. This is my place," said one 23-year-old chewer, who asked not to be named.

"People come here to talk about their problems. If they don't have a place for this, they will fall into the wrong hands," said the mafrish manager, who would only be identified as Fouad.

He worries about young people turning to radical Islam, which he said was preached by some mosques in the area.

In a few cases, British Muslims have travelled to Somalia to fight with the Al-Qaeda-linked militant group Al-Shebab.

"Here is one place where we can talk to people who are turning radical. We can talk them around," said Fouad.

The group advised against banning khat, noting that in health terms, there was little evidence of risks other than a small number of reports associating it with liver disease.

"If you're not banning it because of science, then why are you banning it?" said Ali Osman, 36.

He urged interior minister Theresa May to try khat herself, "then she can ban it if she still wants to".

Announcing the proposed ban on khat in July, the minister said Britain risked becoming a hub for smuggling to countries where khat is banned, such as in most of northern Europe.

She cited its role in "health and social harms, such as low attainment and family breakdown".

Social worker Abdi Mohamed says he sometimes works with khat abuse cases, including neglected children and men distanced from their families by too much time at the mafrish.

But he also encounters families affected by alcohol and cannabis.

"We try to find out what the underlying problem is. The problem is not with the miraa, it's with the person," he said.

Khat is not physically addictive, but some chewers become psychologically hooked.

"I was vulnerable, I was mentally wounded, I thought everyone was looking down on me. I went through hell," he told AFP.

"I would chew from four in the afternoon, all night long, and wake up wanting to chew again."

Awale believes khat is "the biggest barrier to integration for the Somali community".

Somalis are among the poorest of Britain's immigrant groups, with high unemployment. Many fled the civil war which has ravaged the country since 1991.

The khat ban may criminalise some of them, with predictions that drug gangs will take up the trade.

At his warehouse, Mohamed says: "When you struggle, you started from nowhere to become somebody, and your business is closed down, you won't feel good.

"But I don't think only of miraa. This is a good country, I'm safe here, I have freedom. This is my home."