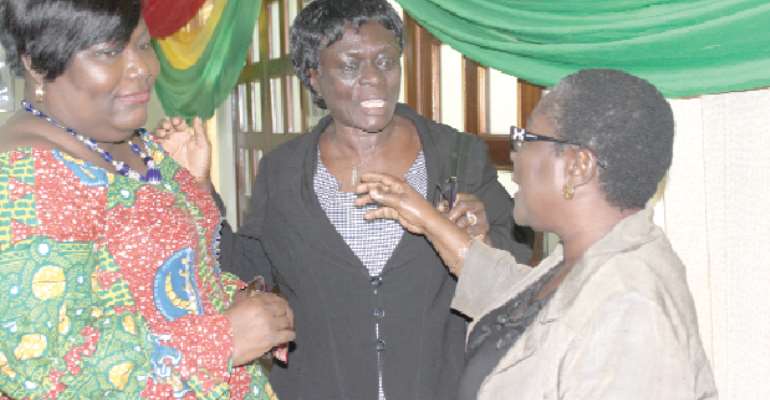 Ghana is a signatory to a number of United Nations (UN) and African Union (AU) charters and conventions on women's empowerment.

Although the country has made some progress since its return to democracy in 1992, the presence of women remains marginal and is considerably below the UN's 30 per cent representation target that the government has committed to achiece by 2015.

The Constitutional Review Commission (CRC) that was set up by the NDC government  in January 2010 as a commission of inquiry to conduct a consultative review of the Constitution found that although women constitute more than 50 per cent of the population of the nation, they formed only eight per cent of political and public office appointments.

CRC recommendation
The CRC, therefore, recommended that Parliament enact a comprehensive Affirmative Action Act to address the broader issues of gender inequality and for Parliament to enact the law, six months after the coming into force of the amendments.

It recommended that political parties be encouraged to adopt voluntary party quotas to promote women's participation in party politics and also that all public institutions adopt gender policies, 'including recruitment policies aimed at achieving a balanced structuring of those institutions in terms of gender'.

The IEA-Ghana, in a bid to ensure that Ghana takes a bold step towards attaining gender parity and equality, is undertaking a project to address the under-representation of women in the political decision-making process.

The project — Integrated Support Programme for the Inclusive Reform and Democratic Dialogue (INSPIRED) — is in collaboration with the EU-funded European Partnerships for Democracy (PD) and it is envisaged that through this process, the basis for broad-based concensus will be created to enhance the sustainability of co-operative initiatives in a given policy area.

As part of its INSPIRED project, the IEA has established a Working Group composed of a broad range of stakeholders with an interest in the issue of under-representation of women in political decision-making.

Over the past two months, the Working Group has worked to propose key recommendations for consideration by the Ministry of Gender, Children and Social Protection as input into the Affirmative Action Bill currently being drafted by the ministry.

Legal basis
Speaking at a national stakeholders' workshop on fighting under-representation of women in political decision making in Ghana, organised by the Institute of Economic Affairs (IEA) in Accra on Wednesday, the Minister of Gender, Children and Social Protection, Nana Oye Lithur, said the legal basis for an Affirmative Action Law could be found in Article 17, 35(5) and 6(b) of the 1992 Constitution on promoting the integration of the people of Ghana and prohibiting discrimination and prejudice on grounds of gender.

She said the concern raised by the findings of the CRC, among others, was that minority of the population usually decideds for the majority.

She also said the government had accepted the CRC's recommendations for a constitutional amendment for Parliament to enact, within 12 months of the coming into force of the amendment of the 1992 Constitution, an Affirmative Action Act that guaranteed 30 per cent representation of women in all public institutions and offices as far as possible and also accepted that the recommended Affirmative Action Act should deal with all types of discrimination against vulnerable groups and minorities.

Ministry's commitment
She pointed out that it is was line with this commitment that the ministry had spearheaded the process and achieved significant results, leading to regional and national consultative stakeholder workshop for inputs on the drafting of the Proposal for the Affirmative Action Bil and said the laying of the bill before Parliament and the various stages for its enactment is to be held from September to the end of 2013.

The recommendations by the IEA's Affirmative Action Working Group, presented at the workshop by Ms Hilary Gbedemah, the Rector of the Law Institute and member of the group, included a proposal that women should be nominated as candidates for safe constituencies, including independent candidates, and a proposal for an independent oversight body, protected by law,  to oversee the implementation of the Affirmative Action Bill.

In his welcome address, a Senior Fellow of the IEA, Prof. Adzei Bekoe, said the institute, through its INSPIRED project, was seeking to attain a wide range of participation of stakeholders in the debate towards the passage of the Affirmative Action Bill.

The various political parties presented solidarity messages while the IEA Affirmative Action Working Group signed a communique that was presented to the Ministry of Gender, Children and Social Protection.