Police have a code to protect themselves; infractions must be investigated by another body - Sowatey 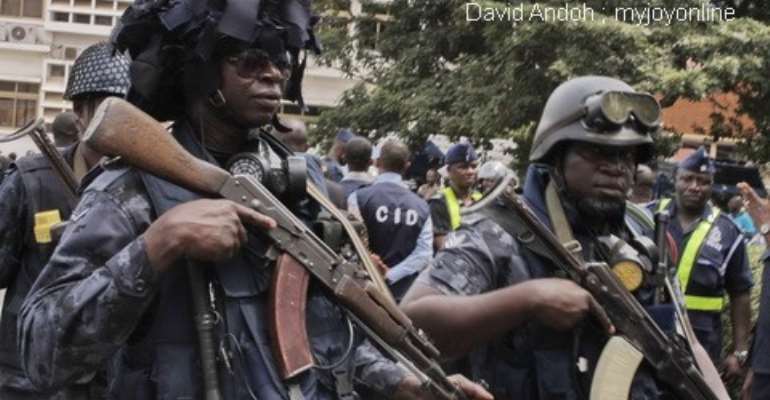 A security analyst, Emmanuel Sowatey is unsure the police would do a good job investigating police officers accused of committing certain infractions including alleged murder of innocent citizens.

Indiscretions on the part of some officers have led to the death of many persons which the police claim have been involved in robbery and other social vices. In most instances the police administration have instituted enquiries into the actions but little have been heard about their outcome.

Two police officers were Monday shot and killed by a police patrol team when the latter was responding to a distress call at a robbery scene. The team on their way to the scene mistook the two, who were in a car, to be the robbers and indiscriminately opened fire on them.

Though the police administration says it has commissioned investigation into the incident, Mr Sowatey has raised issues with the internal investigation.

His doubt is premised on what he claimed is a written code by the service which implore officers to protect their own.

"The internal enquiry would amount to nothing," Mr Sowatey asserted, and demanded infractions by police officers are investigated by the Commission on Human Rights and Administrative Justice or an independent body.

He condemned the police for pulling the trigger at the least chance they get, even in a situation where they have the opportunity to arrest the suspected criminals.

To absolve themselves from blame and backlash, the police often come under the cover of an "enduring narrative" that the dead, "who cannot talk" first opened fire.

The security analyst demanded to know the ranks of the officers in the team and their commander. He claimed police personnel usually learn on the field, due to that the inexperienced once "panic and commit mistakes" on duty.

However, he remarked that most police officers are tempted to shoot and kill to avert the reverse because families of officers who die in line of duty are not given the best of treatment. But that, he said, is not justification for them to adopt the shoot and kill strategy.

Meanwhile, residents at Gomoa Pomaadze, a community near winneba where the incident occurred, are calling on the police administration to bring the police personnel who shot and killed the two police officers to book.

According to them, they do not understand why the police should shoot and kill a mere suspect on the street. They want the police administration to deal with the culprit just as they would have dealt with a civilian