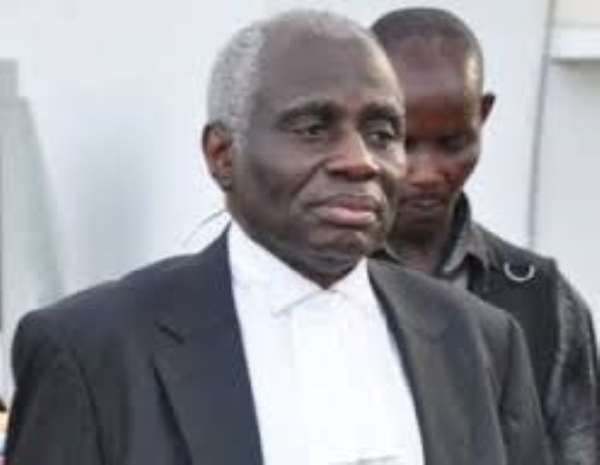 The Commander in Chief of the Ghana Armed Forces, President John Dramani Mahama, yesterday gave real meaning to the biblical quotation that whoever spares the rod hates his children, by hacking the loquacious Tsatsu Tsikata, counsel for the National Democratic Congress (NDC), in the just-ended election petition, and several other persons who have turned the judges who sat on the landmark case into punching bags.

The obviously flabbergasted President, who was voting with his feet in a meeting he held with the National Chief Imam, Sheik Nuhu Sharabutu, could not decipher what might have prompted the swash-buckling lawyers leading the assault to launch such blistering attacks on the judges.

President Mahama did not mention Mr. Tsatsu Tsikata's name throughout his speech at the Flagstaff House yesterday, but it is obvious that the former law lecturer and legal luminary has come under public criticism after accusing one of the Supreme Court judges who heard the election petition case, Justice Anin Yeboah, of letting his political affiliation with the New Patriotic Party (NPP) to determine his judgement.

Speaking on TV3's maiden 'Hot Issues' programme, hosted by veteran journalist Kwesi Pratt Jnr. last week Sunday, Tsatsu said because Justice Anin Yeboah was appointed by former President Kufuor to the Supreme Court, he opposed the National Democratic Congress at every turn of the case. Tsikata did not end there, but went further to mention the ruling by Justice Anin Yeboah in a case that involved him (Tsatsu) in the past.

Another lawyer, Gabby Otchere Darko, Chief Executive of the Danquah Institute, also described the whole judgement delivered by the judges at the Supreme Court in the same election petition case as corrupt.

Following public condemnation of the comment, Gabby later stated that he did not single out any judge as being corrupt, and that he was talking about the judgement itself.

Tsatsu Tsikata, who is also the former Chief Executive Officer of the Ghana National Petroleum Corporation (GNPC), has also refused to apologise for the unjustifiable attack on the judge.

But, to President John Mahama, the attacks have absolutely no justification. 'I believe that the current commentary that is going on about the justices of the court and all that are absolutely unnecessary; the court has decided, let's put the case behind us.

'Let's rally together as a nation; there is a lot of work to do; let's put our shoulders to the wheel, and let's do that work so that our nation will become a better place for ourselves and our children,' he said.

According to President Mahama, the verdict has further deepened the democratic credentials of the country, and that every Ghanaian needed to be proud of that feat.

President Mahama said God, over the years, had been merciful to Ghana by continuously protecting the citizenry, and called on Ghanaians to justify the blessings, by uniting for development.

Sheik Arimeyao Shuaib, spokesperson for the National Chief Imam, pleaded with Mr. Mahama to form an all-inclusive government that would bring about unity among the stakeholders.

He said the country had remained united on account of the education of the electorate, and appealed to the leadership of all the political parties to continue educating their followers, for the sake of peace.