Statement: Save Our Whales From Dying

By Friends Of The Nation 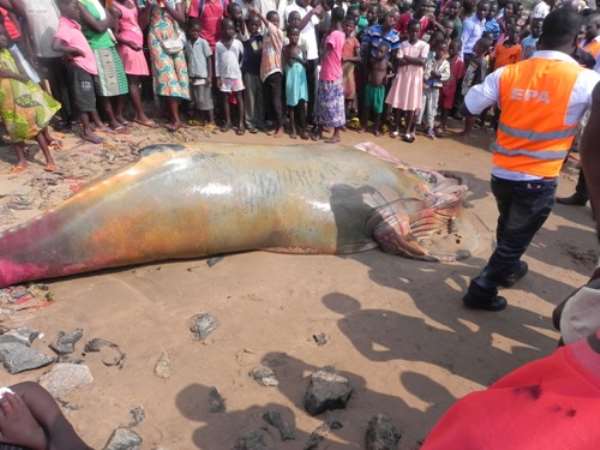 The rampant dying of whales in Ghana is disturbing and unfortunate. This tells us that something serious is happening in the marine environment and we need to find out what it is.

Though the death of whales is not an uncommon phenomenon, the frequency within the last four years is worrying.

It is on record that since 2009, when oil exploration and production became intensive about 16 whales has washed ashore. The most recent incidents being the washing ashore of five (5) Whales in a week in Asanta, Kikam, Nkontompo (all in the Western Region) and other areas in the Greater Accra Region. This is very alarming,

Unfortunately, there has been no official response and explanations from regulatory agencies to why the whales are dying since this began about four years ago.

Friends of the Nation has on several occasions raised the issue of the rampant dying of whales with the regulatory agencies: Fisheries Commission, Ministry of Environment, Science, Technology and Innovation, Ministry of Energy, the Environmental Protection Agencies, etc. Several letters has been written to these institutions including the Tullow Oil and the Jubilee partners but no official response has been received since October 2012.

This is making us believe that maybe our institutions are not interested or prepared to provide the public with tangible answers we require.

OR
They are not conducting any investigations as we are told whilst we all sit in wait.

It is noteworthy that the Environmental Impact Statement of the Jubilee field predicted residual impacts on marine mammals including whales. And the EIS document admitted that the marine mammals including whales could die as a result of the impacts so they proposed some mitigation measures to address this situation. But the question is that are these mitigation measures been implemented? Is EPA monitoring whether indeed the mitigations are been implemented? Where are the monitoring reports from the mitigation actions, and Why are our whale dying?

It is worrying to observe that in events when these whales are washed ashore, coastal communities are left helpless to deal with the pungent smell emerging from the decomposing bodies and have no option than hack them into pieces and bury them onshore. The environmental and health risk associated with this phenomenon is profound.

There is therefore increasing public resentment and attributions that whales being washed ashore are caused by interferences of ocean noise and vibrations from sonar and seismic exploration activities and collision with oil and gas infrastructure or even pollution in the marine environment.

It is also important to note that section 93 of Fishers Act 625 calls for a Fisheries Impact Assessment (FIA) to be conducted in addition to an EIA for activities such as offshore oil and Gas exploitation. But unfortunately the FIA has not been done for the offshore oil and gas, The FIA when conducted would identity all possible impacts of offshore oil and gas activities and proposes effective mitigation measure to address the impacts.

Against this background we recommend the following actions to be taken

The Fisheries Commission, Environmental Protection Agency and other regulatory agencies should conduct an extensive investigation to ascertain the death of these whales and the findings should be made public.

The Fisheries Commission as a matter of urgency activate Section 93 of the Fisheries Act, 2002, Act 625. And get all oil companies to conduct Fisheries Impact Assessment as required by Law.

The Environmental Protection Agency should revise the Guidelines of Oil & Gas operations and include the requirement of at least a Preliminary Environmental Assessment for all offshore seismic exploration surveys.

We in FoN share these concerns with partners and the media on this day Wednesday September 4, 2013