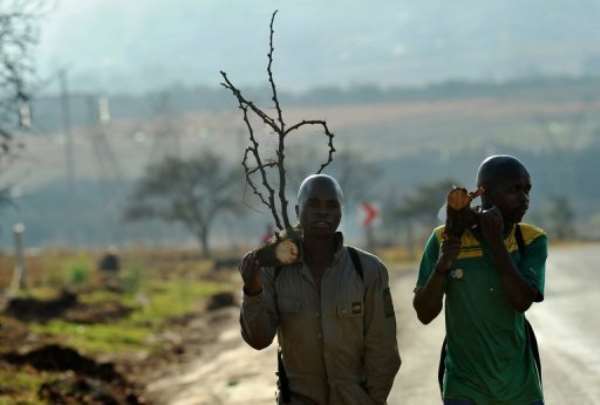 JOHANNESBURG (AFP) - Two of the seven South African gold mine producers touched by a pay strike said Wednesday they have struck a wage settlement with unions as the work stoppage entered day two.

Evander Gold Mine and Village Main Reef -- which are the smaller of the lot -- agreed to increases of between 7.5 and 8.0 percent for around 5,000 affected workers.

Some 107,000 workers are employed by the companies affected by the strike. The entire gold industry in South Africa employs around 140,000 workers.

The producers' chief negotiator, Elize Strydom of the Chamber of Mines, said the "producers were particularly encouraged by the settlements reached".

On Wednesday union officials appear to hint they were prepared to lower their demands with some media reports suggesting they could go as low as 10 percent.

The National Union of Mineworkers (NUM) which represents around two-thirds of the gold mines employees, said it had not backed down, but was open to further negotiations.

"The NUM has not settled for a 10 percent. That is not true, our demand stands, but we are open to negotiations," NUM spokesman Lesiba Seshoka told AFP.

The chamber of mines said discussions with all unions would be continuing Wednesday.

Ruling ANC deputy president Cyril Ramaphosa urged the unions and operators "to spare no moment, no time, no energy ... and find a solution to the strike."

"Strikes are always resolved at the end of the day, the longer they take, the more it creates problems for all those involved," Ramaphosa told AFP.

All but one of the seven affected producers -- which include giants Harmony, AngloGold Ashanti, and Sibanye Gold -- were hit by the strike.

Mbuyiseli Hibana, NUM regional secretary in the mining town of Carletonville, south of Johannesburg, said more workers were expected to stay away on Wednesday.

"This is a legal strike so the workers are not afraid of losing their jobs like in the past," said Hibana.

The gold sector stands to lose 761 kilogrammes in production each day, worth around $34 million, as a result of work stoppages, gold industry spokeswoman Charmane Russell said.

Stoppages in the mining sector have become a frequent occurrence during annual wage negotiations, but this year they come amid sluggish growth and rampant unemployment.

South Africa was for decades the world's largest gold producer, but its share of production has shrunk from 68 percent in 1970 to six percent of the world total last year.