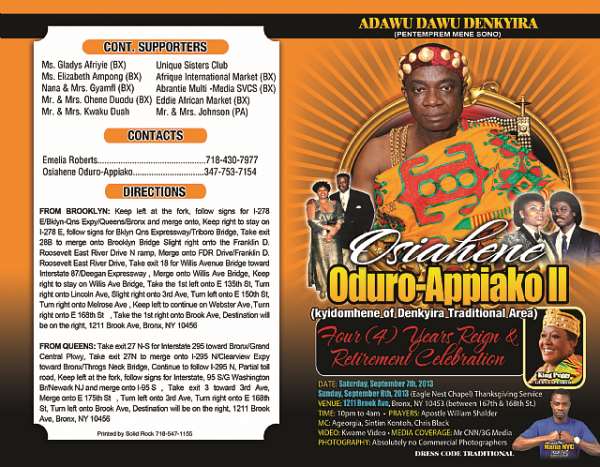 'ONYAME NA OSI OHENE' The Oyoko clan of Jukwa in the central Region of Ghana will be having one of the best days in the clan's history on Saturday September 7, 2013 in the Bronx, New York.

The occupant of the Kyidom stool in the Denkyira Traditional area is Osiahene Oduro-Appiako II-The Divine chosen one (Onyame na osi ohene).

'Onyankopon na esi Ohene' Also 'DeƐ adeƐ wↃno na odie'. After a divine revelation by an apostle of Christ in the church (Eagle Nest INT. Chapel) and five months after the revelation then Mr. Thomas Oduro was chosen amongst some well deserved candidates.

The Grandmother who hails from the Oyoko family in Jukwa migrated to Ashanti region through marriage.she passed away almost a century ago. Her children grew up under the loving care of their father Nana Kwame Otchere of Tetrem in Agona district in Ashanti region.

Some of the children became lawyers, nurse anaethesist, and a headmaster.

In the course of time two of Osiahene's uncle's tried in vain for the throne. Their disqualification was simply 'They did not know the Denkyira culture' Almost four decades of not setting foot in the Denkyira Land, Osiahene received a call from his sister (Nana Adowaa) that, the occupant of the stool Nana Ofosu has gone to the village and after careful consideration, the kingmakers are considering the Denkyira Oyoko family of Tetrem and their candidate.

This happened exactly six months after the divine prophecy in the church. Osiahene was called home from the United States and enstooled in August 17th, 2009.

Four years after his coronation, Osiahene has been able to bring together the Denkyira citizens of New York metropolis giving birth to the first Denkyiraman Association of USA. (DAUSA). He has brought together the youths of Jukwa and 'The keep fit club' has been inaugurated. During the inauguration Osiahene presented the youths with sports equipment - Jerseys, Soccer cleats, footballs and socks worth hundreds of dollars and asked them to be law abiding and hardworking. In addition to the Jukwa keep fit club, Osiahene has extended his hands to Jukwa senior high school. Presently, Osiahene has presented about five sets of jerseys, soccer cleats and football etc to the high school. Now JUKSEC as is popularly known is the most well dressed high school in soccer in the country. They went to the finals with Koforidua Secondary technical school in the Milo games in 2010 where they lost the championship through penalty kicks.

In January 2013, Osiahene single handedly donated text books worth thousands of dollars (half a container) to Jukwa senior high school to revamp the school library. - Train the Child in the way he/she should go and when he is old he would not depart from it. 'Proverbs 22: 6'. Osiahene has also extended his hands to the birthplace - Tetrem - to the Osei Tutu II College, where he donated sport equipments in December 2010 to help sports in the college. In this milestone celebration, personalities in attendance will include Lady King Peggy - The King of Otuam traditional area of Ghana (The only female king in Ghana). Nana Dr. Esseim Kwaakontan III, Sanaahene of Denkyira traditional area known in professional life as Dr. Mensah Aborampa of UNO. Okokyeredom Acheampong Tieku- the Asantefour hene of New York. A host of traditional rulers from Ghana living in New York will be represented. The great Mr. CNN - Photo journalist and Nana Sompahene of Dechemso will do the photo shoot.

In the bible it's written 'So also good works is conspicuous and even those that are not cannot remain hidden' - 1 Timothy 5:25. To be chosen for such a great position in Denkyira chieftancy institution is such a great honor and deserves a great celebration.

I don’t know him – Afoko denies knowledge of prosecution wit...
33 minutes ago