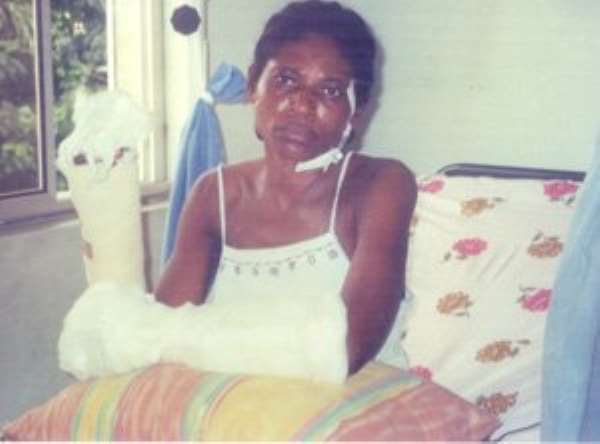 A female victim of the interparty clash which claimed the life of an NDC activist in Tamale has expressed surprise at the jail sentence slapped upon her party supporters in a recent verdict by a Tamale High Court with one convicted to be hanged.

In another reaction, Fusheini Bawah Zakaria Kpana shared the sentiment of the victim of the attack when he called DAILY GUIDE to pour out his heart.

'What happened was nothing but a miscarriage of justice, especially, the sentence of death by hanging ordered for an NPP youth activist,' Yakubu Yahuza.

A peeved Fusheni Kpana described the jury which passed the judgment as constituted by known NDC activists and could not have therefore been objective in their decision.

'Mr Yahuza Yakubu was found guilty by a jury constituted by known activists of the NDC for alleged murder and conspiracy to commit murder of Abdul Rashid Mohammed, an activist of the National Democratic Congress (NDC) in Tamale in February 2009,' he said.

The targeted and precision guided injustice delivery system orchestrated by the NDC government he said did not end with Yahuza,' but was extended to the imposition of 36 years imprisonment of four other widely known activists of the NPP namely, Majeed Alhassan, Habib Mohammed Dagbana, Shaibu Alhassan and Moro Gundana in hard labour following their conviction for conspiracy to commit murder.'

Following the declaration of the 2008 elections and the subsequent swearing of the then president elect, the late John Evans Atta Mills as president, the NDC youth in the Tamale Metropolis, he said, attacked and destroyed anything NPP using sophisticated weapons.

'They went on rampage and indeed attacked houses belonging to NPP sympathizers with impunity,' he continued.

Their NPP counterparts responded and what resulted is anybody's guess he said.

The police frustrated Sardia and denied her of the opportunity to see her assailants face the full force of the law. Today, Sardia's assailants are walking free on the streets of Tamale while their victim is visibly scarred on all parts of her body, he said.

'It is clear that the government of the NDC is bent on continuing on the path of planting and nurturing the seeds of impunity in Tamale and Northern Region,' he said.

He called upon the police to re-arrest the suspects in the assault of Sardia especially since there is no statute of limitation in criminal matters.