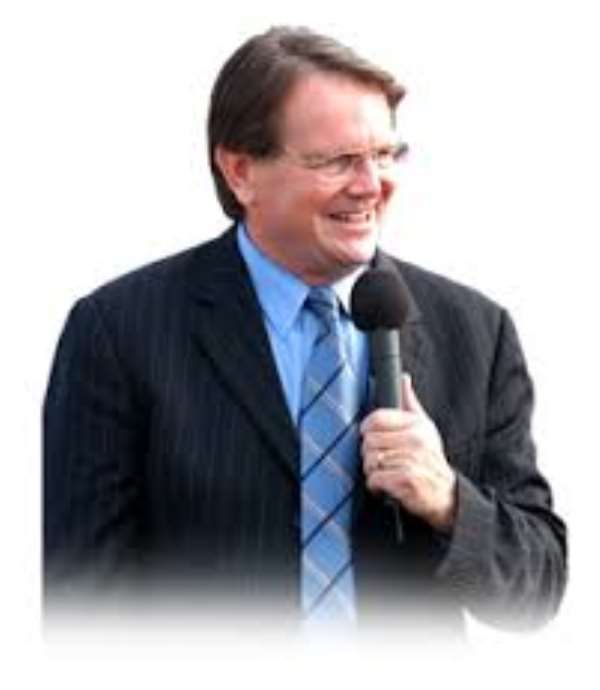 The renowned German evangelist, Reinhard Bonnke, is expected to hold a mammoth crusade in Accra, between November 7th and 10 th to win more souls for Christ.

The last time the German held a similar crusade in Accra was in 1988, where the blind saw and the lame walked.

Rev. John Darko, Africa Director of Christ for all Nations, headed by Bonnke, told a meeting of editors in Accra on Monday that they are expecting over one million people to attend the crusade, which would be held at the Independence Square in Accra.

According to Rev Darko, the crusade, which is being held under the auspices of Christian Council of Ghana, would be graced by President Mahama on the opening day.

Rev. Darko further told the Editors that a number of dignitaries, which also include investors, would accompany the evangelist to Ghana.

He noted that in one of Bonnke's crusade in Burkina Fasso, workers who have stolen from one of the local hospitals returned the stolen items, which were handed over to the hospital.

He was hopeful that similar miracles could happen in Ghana during the Accra crusade.

The official launch of the crusade would be done tomorrow to officially announce the presence of the man of God to Ghanaians.

Meanwhile, the following is a brief write up about Reinhard Bonnke's ministry and miracles he has performed.

In 1974, the evangelistic organization that is today still known as ' Christ for all Nations' was born, and a small team gathered around the young evangelist Reinhard Broke to reach out to the people of Africa.

The preaching of the Word began to produce a harvest of souls and in addition to this; people were being healed of all kinds of diseases.

In obedience to a word from the Lord, Reinhard led his fledgling team to the national stadium of the country of Botswana, in the city of Gaborone, to hold a city-wide Gospel Crusade.

Although he had never preached in a stadium before, he trusted God for a miracle as one church after the other declined to participate, wondering who this unknown preacher was and why he was so enthusiastic about an obvious impossibility.

With only one small fellowship co-operating, the meeting began and Reinhard's disappointment can be imagined when one hundred people came to the first meeting.

He nevertheless preached as if the place was full and to his complete amazement, after only a few minutes, a man in the congregation jumped to his feet and disrupted the proceedings by shouting out, 'I've just been healed!' This was repeated five times over, as others shouted out the same time, resulting in an outburst of joyous praise.

The news that God was performing miracles in the stadium soon spread across the city and by the final meeting, for the first time in his short ministry, Reinhard preached to a packed stadium.

Thousands streamed forward for forgiveness of their sins, hundreds were healed and thousands more were baptized in the Holy Spirit- and this was just the beginning.

On a return visit to the country of Botswana, twelve years later, the leader of a large denomination reported that eighty percent of his current pastors were converts from that crusade in Gaborone.

The Yellow Tent
Events moved rapidly after this, as the Yellow Tent seating ten thousand people was built and the results of the ministry began to grow. Follow-up teams were formed to help usher the new converts into the local churches and preparation teams began to travel in advance of the ministry team to prepare the ground for harvest.

Before long, the need for a larger tent was crystallized into action by a word from the Lord about the biggest tent of all, one that would seat thirty-four thousand people. Large enough to completely cover three football fields, with masts that rose as high as a big storey building, the 'Big Tent' was a giant in every respect. It stood like a gigantic combine harvester, ready to move out into the ripe harvest field of Africa.

It was only a matter of two years though, before even this huge canopy could no longer contain the masses that were streaming to the Gospel Crusades. It was after Blantyre, Malawi, that the big tent was no longer used, because there a crowd of 150, 000 people attended a single meeting, more than four times the capacity of the big tent!

Over Fifty Two Million Souls Saved
Open-air crusades became the order of the day, as hundreds of thousands flocked to every meeting. In one particular crusade held in Lagos, Nigeria, 1,600,000 people came to a single meeting with a total of six million attending the five days of services.

The ministry team moved from East Africa to West Africa and back again as the two, organized events on opposite sides of the continent of Africa. Since the beginning of this evangelistic ministry, Reinhard Bonnke has preached face to face to millions of people in Africa alone.

Since the year 2000 alone, 52 million people of that vast numbers have responded to the call of salvation, filling out decision cards and being ushered into the church follow-up program.