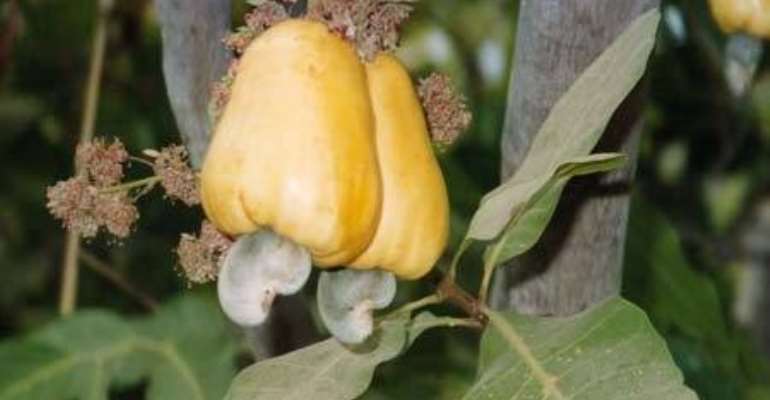 Accra, Sept. 3, GNA - The prospects of Ghana's cashew production is high because the country can rake in between 300 dollars and 400 million dollars if she increases her cashew production from the current 50,000 metric tonnes to 200,000 tonnes annually.

Mr Windfred Osei Owusu, President of the Ghana Cashew Industry Association, who made the observation on Tuesday, added that the country could attain the goal if 90 per cent of the raw cashew nuts were processed.

He was speaking in Accra at the launch of the World Cashew Festival and Expo 2013 in Africa, on the theme: 'Value Chain and Gains-Focusing on the Potential to Leverage Profit in Each Sector of the Cashew Industry and in New Markets.'

The event, which is expected to come off between September 16 and 19, would be organised by the African Cashew Alliance's (ACA), to assist players in the industry to develop the value-chain process.

The four-day programme would also provide a platform for cashew farmers, processors, traders, exporters, service providers, retailers, equipment manufacturers, bankers and other stakeholders to fashion out innovative ways to improve and sustain the industry.

Mr Owusu called on the Government to roll out the Cashew Development Project and similar policy interventions to sustain the industry.

He was optimistic that if the players received Government support, similar to those enjoyed by cocoa, palm and mango farmers, the cashew business would thrive.

Mr Owusu appealed to Government to make funds available to cashew farmers through the Export Development and Agricultural Investment Fund.

He called on the farmers to join associations and apex bodies to access technical support to build their capacity to sustain their businesses.

Mr Owusu said increased investor interest in the industry was a positive indication that the sector had much to offer in terms of job creation, poverty alleviation and income generation.

He said one of Brazil's leading cashew businesses, was in the process of setting up a 35,000-metric-tonne capacity facility at Prampram, in the Eastern suburb of Accra.

Mr Owusu said he was hopeful the project would create 2000 direct jobs and other auxiliary employment opportunities and called on the media to sensitise the public on the economic and the nutritional value of cashew products.

He discredited speculations in the media that the cashew production in the country was dwindling.

Speaking on the upcoming Cashew Festival, Mr Roger Brou, Managing Director of ACA, said the event would give farmers the platform to explore innovative business prospects in the industry.

Beekeeping and production of cashew-apple juice are some new markets farmers could discover.

Ghana is said to have produced more than 20,000 metric tonnes of raw cashew nuts in the year 2012, with its production largely centered in the Brong-Ahafo Region.

The country is considered to be the hub for trading cashews from neighbouring countries, including Cote d'Ivoire and Burkina Faso.