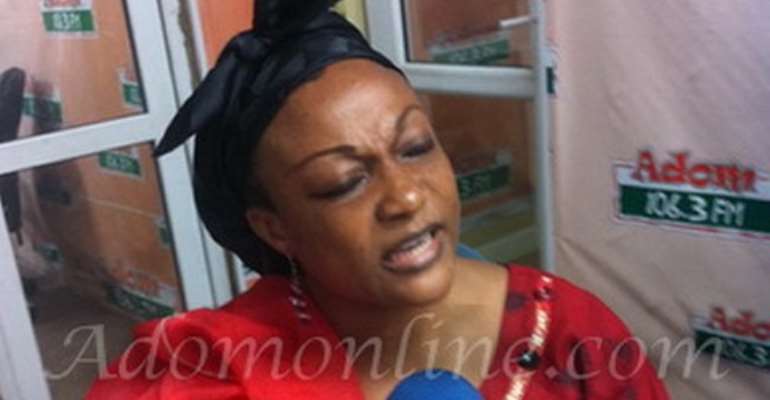 The National Women's Organizer of the New Patriotic Party (NPP), Otiko Afisa Djaba has declared a state of mourning for Ghana's democracy, following the verdict given by the Supreme Court in the 2012 presidential election petition.

According to Madam Djaba, justice and equity was absent from the judgment of the nine-member panel which heard the petition. She believes it was skewed to favour President Mahama and the governing National Democratic Congress (NDC), not the entire nation.

She has therefore called on all “well meaning Ghanaians to wear mourning clothes to show our hurt and disappointment at the verdict.”

Speaking on Adom FM's “Dwaso Nsem” morning show Tuesday, Otiko Djaba questioned the issues that went into the decision of the court, saying “Man's will has been put in this case, because this is not God's will but rather man's will.”

“The verdict is not the Ghanaian dream and not boldness as Ghana's National Anthem says” she told Captain Smart, host of the show.

The outspoken NPP women's organizer wondered why the President, his Vice and some senior members of the NDC were wearing white in the morning the verdict was read, saying, “What did they know that the rest of us did not know?”

She challenged President Mahama to rein in his party members whose utterances could inflame passions, “especially the babies with sharp teeth and the old men with razor teeth” whom she says are unduly provoking NPP members still coming to terms with the “unjust verdict.”

Commenting on the accusation of bias leveled against a member of the nine-member panel that heard the petition by Tsatsu Tsikata, lead counsel for the NDC Otiko Djaba urged President John Mahama to act swiftly to preserve the integrity of the judiciary.

She maintained that Mr Tsakata's comment was “irresponsible to the highest level,” especially coming from a lawyer with decades of standing at the bar, and challenged the Peace Council to publicly reprimand him.

Meanwhile, an NDC panel member on the show, Ruth Seddoh, has attributed Tsatsu Tsikata's “excellent Queen's English” to the victory chalked by the Respondents in the election petition.

According to her, the petitioners' lawyers as well as the generality of NPP members failed to understand the import of Mr Tsikata's arguments, and were therefore “making noise that they should have won.”

“It's because Mr. Tsatsu Tsikata speaks the Queen's language and members of the NPP do not understand, that is why they are attacking him in such manner.”

Demonstrate diligence and honesty in your work – Outgoing KM...
16 minutes ago