Why Should Mandela Suffer For The Crimes Of Aparthied? 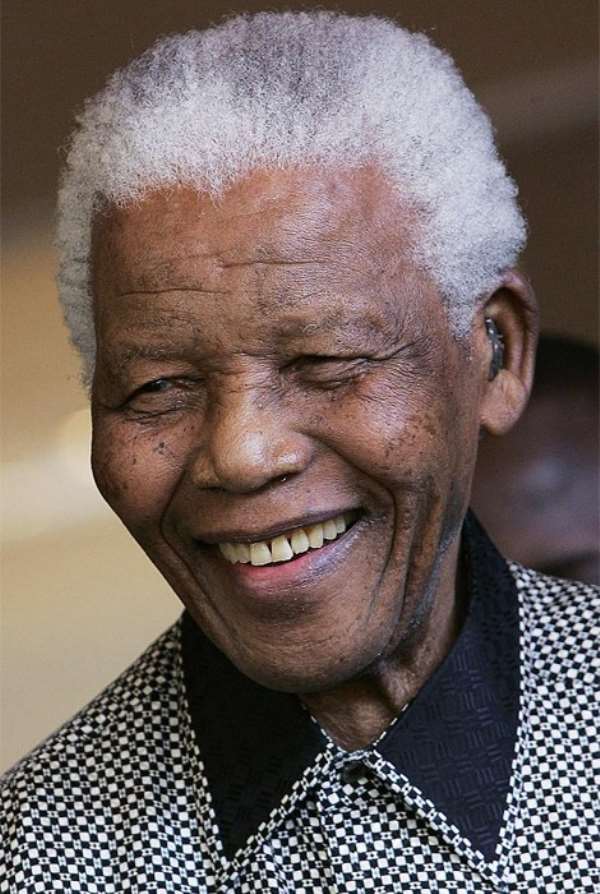 Former South African President, Nelson Mandela, is back home once again after having been in and out of hospital for close to eight months. He had been undergoing treatment for a lung infection, a government spokesman had said.

The 94-year-old anti-apartheid icon will now receive intensive medical care at home, according to official Doctors.

Nelson Mandela had been in the hospital since December 8. Recently, officials have said he was improving and was in good spirits and Doctors have taken extraordinary care with his health because of his age.

According to Southern African sources, the former President has been on a life support machine which is keeping him alive all this while.

What is worrying is the South African government's continuous indecision as to what to do in the event of the death of the former President and how it was going to handle the rapture that would follow the announcement of his death, hence the use of the life support machine to keep Nelson Mandela alive.

But for how long are they going to keep him on the live support machine?

The question is, why is the South African government still keeping the man alive and in whose interest are they keeping Mandela alive and for what purpose?.

As death, inevitable and certain it is taking away Nelson Mandela, some people are now realising what the absence of Mandela would cost the nation in terms of dealing with the crimes of apartheid which had been swept under the carpet.

It is obvious that there are some people who think Nelson Mandela must at all cost be kept alive. This is why I am asking the question 'why should Mandela suffer for the crimes of apartheid'.

South Africa has come out of many years of struggle with the loss of millions of lives to attain Black majority rule which saw Nelson Mandela as the first Black South African President.

Mandela himself had spent 27 years in prison under the white apartheid regime. Many Black South Africans, including Mandela had to make a lot of sacrifices as to what to do with remnants of the apartheid system.

For peace to prevail and Black South Africans be able to do away with the hatred that had engulfed them over the years, Nelson Mandela had asked his people to forgive and forget the past and live in peace with their former slave masters.

Out of respect for their President, many Black South Africans willingly swept their pain and anger under the carpet and pretended nothing had happened in their relationship with their white neighbours and has since been living with them.

After the election that saw the country's first Black majority rule, it had been the expectation of many Black South Africans that the African National Congress (ANC) would make life more meaningful and worthwhile for them.

Unfortunately, the ANC has not been able to fulfil this great expectation and majority of South Africans are becoming frustrated with their current situation and this is bringing out all the anger they had buried over the years.

Economic hardships is biting the ordinary South African so hard they have began asking how come they are so impoverished in their own country?

This is because while they lament the failure of the ANC government to remove them from their impoverishment, they can see with a look over their shoulders, the luxurious and opulent life style of their white brothers and sisters in the same neighbourhood. Economic deprivation is what they see everywhere they turn.

Coupled with these problems, the leadership of the ANC, since President Jacob Zumah assumed office, has been having some internal conflicts which has seen the former President of the ANC Youth league, Julius Malema breaking away to form his political party the Economic Freedom Fighters (EFF).

Are these problems within the ANC and the frustration among the population because of the failure to meet their needs making the South African government apprehensive? Or they are worried about the expression 'payback time' that is now so commonly used in South Africa in reference to dealing with the past.

Not long ago, I had done an article calling the attention of the International Community to the fact that the situation in South African is becoming a time bomb that would explode any moment with the passing of Nelson Mandela, unless some solution is found to calm the tension in the country.

In that article, I tried to lay bear the ordinary South African's mind set in relation to the region's impoverishment because for many years the Black South Africans have been denied the use of their lands.

In Africa, land is the most important asset any family has and when an African family is denied this precious asset, it is like taking away that family's daily bread from them.

Since 1994 when South Africa gained true independence from white minority rule, this is the first time the ANC is being tested and they seem to be wobbling woefully because they had always used Mandela as a shield since the people respect him so much and now he seem to be slipping through their fingers and they cannot do anything about it.

Nelson Mandela was discharged from hospital in Pretoria last Sunday and brought home with the Doctors saying his condition "remains critical and is at times unstable".

So if his condition is still critical, then why has it become necessary for him to be discharged from Hospital? Are the South African government and the Doctors telling the whole world that condition in the Mandela home is better than what is at the Hospital? Or he has been brought home to die in his own home?

The ANC government led by President Jacob Zuma must by now be taking the bull by the horn and saying it as it is, as far as the health of Nelson Mandela was concerned.

The South African people have come to terms with what is going on, they have by now accepted the fact that the former President wasn't going to live forever and ever and that one day he would pass away.

They should remove the man from the life support machine and allow him to die peacefully and should not be afraid of the death of Mandela but the living, who are causing all the tension surrounding the demise of Mandela because they strongly believe there are some unfinished business to be settle once Nelson Mandela is no more.

The International Community must not watch South African become another Zimbabwe because of the Land issues. The earlier Land is redistributed in South Africa, the better it would be for all, both whites and Blacks.

Gov't hands over seized rosewood to Trustees of National Cat...
56 minutes ago