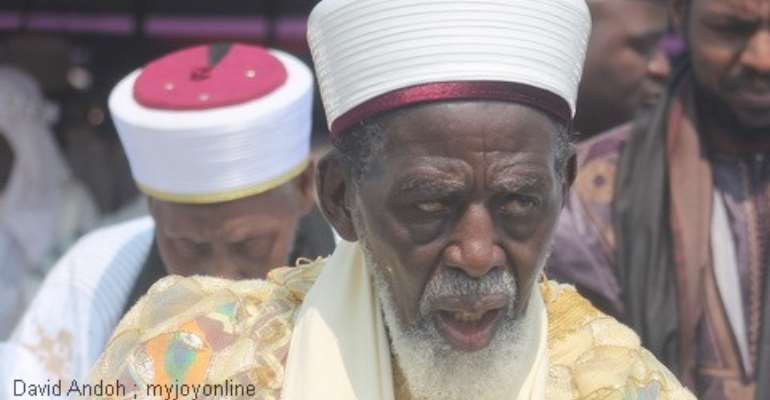 He also commended Nana Akufo-Addo, who was the 2012 Presidential candidate of the New Patriotic Party (NPP), for choosing not to seek a review of the judgement, a move the sheikh said would strengthen the peace of the country to the admiration of the international community.

The Chief Imam was at Nana Akufo-Addo's Nima residence in Accra Monday to reciprocate a visit the former paid him prior to petitioning the court on the 2012 elections and also to laud him for accepting the judgement.

By that decision, the Supreme Court threw out the petition filed by the Nana Akufo-Addo, his running mate Dr Mahamudu Bawumia and Mr Jake Otanka Obetsebi-Lamptey who is the National Chairman of the NPP.

According to the Chief Imam, Nana Akufo-Addo had by exhibiting that courageous act, shown the entire world that although he wanted to be president of Ghana, he had at all times had the unity and peace of the nation at heart.

Sheikh Sharubutu gave thanks to Allah for granting Ghanaians the peace they have always sought and asked the citizenry not to cease thanking Allah for protecting Ghana.

He quoted Quran Chapter 14 verse 7 which states. "And [remember] when your Lord proclaimed. 'If you are grateful. I will surely increase you [in favour]: but if you deny, indeed my punishment is severe.”

For his part, Nana Akufo-Addo said the serene atmosphere that had pertained in the country after the judgement was the desire of the people of Ghana to show that "we are once again the black star of this continent”.

He said with their confidence in the rule of law and the institutions of state, Ghanaians would remain peaceful, accept the judgement and serve as a shining example to the rest of the African continent.

The NPP leader pointed out that the reason behind his decision to accept the judgement immediately after the Supreme Court had pronounced it, was to set a good example for Ghanaians, especially the youth.

Nana Akufo-Addo added that coming from a home which formed part of the traditions that pioneered Ghanaian's independence struggle also formed the basis for his decision to always put the interest of the nation first.

He said he also accepted the judgement to fulfill a promise he made to the Chief Imam in that regard, "...In all humility, you are someone I consider as my father and I will never go back on a promise I made to you.”

"l wanted a peaceful resolution of the matter that was why we went to court. We also wanted to prove to the world that Ghana is different from many other countries. I cannot lie to you. God will not forgive me. if I did that”, Akufo-Addo told the Chief Imam.

He said as a lawyer, he was aware that when law courts decide on cases, there was the likelihood that one would lose or win.