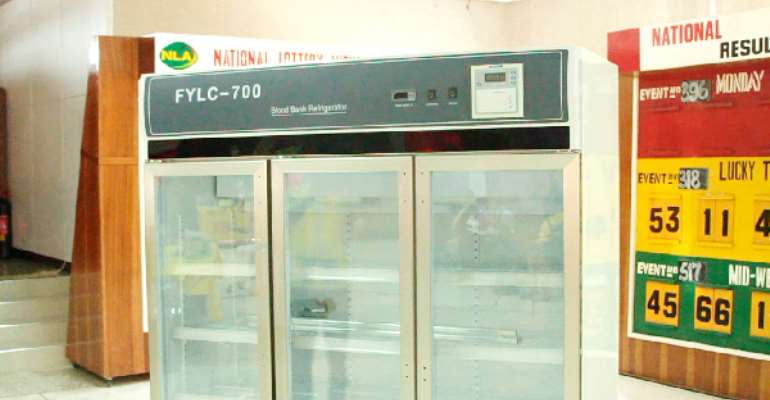 The acting Director-General of the NLA, Brigadier-General Martin Ahiaglo, presented the items to the Minister of Health, Ms Sherry Ayittey, in Accra and said the installation of the refrigerators would also be financed by the NLA.

He said the beneficiary hospitals were selected based on the NLA's business strategy of rewarding communities that patronised the NLA games.

The gesture, Brigadier Ahiaglo said, was also to discourage illegal lottery activities, commonly known as banker-to-banker in some endemic communities so that they would play the lawful game.

He said in doing that the communities would also be contributing to the overall development of the country instead of promoting a few selfish, illegal lottery operators.

Brigadier Ahiaglo noted that blood donation had become common among many institutions and groups, although a lot more needed to be done for consistency and sustainability in blood supply.

'Requiring equal attention is the preservation of blood at the required temperatures and conditions, using the right equipment to avoid spoilage and waste, 'he stressed.

Brigadier Ahiaglo explained that it was in recognition of this need that the NLA provided the health facilities with the refrigerators to aid their effort to save and preserve human lives.

He impressed on the general public, particularly Ghanaians who had attained the legal lottery age of 18+ to see lottery as a game and a tool for mobilising the much-needed revenue for development.