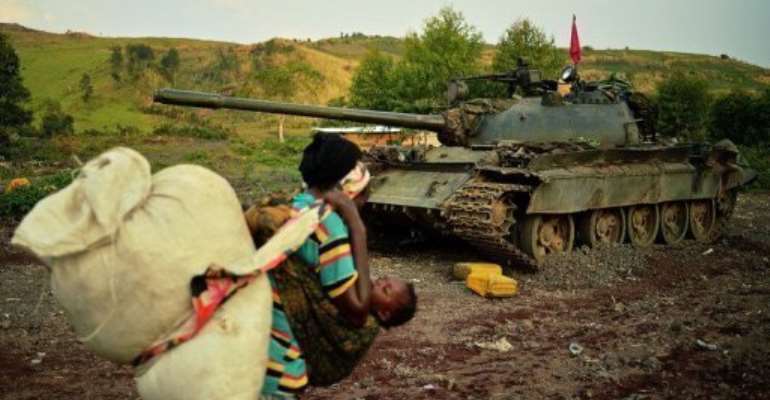 A woman carrying a child walks past an army tank in Goma on August 31, 2013. By Carl de Souza (AFP/File)

Robinson, the former president of Ireland, is visiting the resource-rich but chronically unstable region to push for a deal to end the 16-month conflict between the Congolese military and the M23 army mutineers.

"The M23 must cease violence, must disarm as the UN Security Council demanded," Robinson said after meeting local officials and residents in the flashpoint city of Goma, the hub around which most of the fighting has revolved.

She arrived as the Congolese army prepared a new offensive to take back a rebel base at Kibumba, some 30 kilometres (20 miles) north of Goma.

A senior Congolese army officer told AFP Monday that an attack on Kibumba is expected "in the very near future".

But there was no fighting to be heard by late Monday, said an AFP photographer near the frontline.

Congolese troops, backed by a special UN offensive force created to combat the M23 and other armed groups, launched a fresh assault against the M23 late last month.

On Friday the rebels pulled back from positions around Goma, a mining town and the capital of North Kivu province which they seized for 12 days last November before pulling out under international pressure.

The rebels said their decision to pull back from their perimeter 15 kilometres outside Goma -- which they termed a "unilateral ceasefire" -- was aimed at "creating a favourable climate" for a political solution to the crisis.

But they warned they were not prepared to wait long for the government to reciprocate.

The M23 has accused the government of readying troops and tanks to open a new front in Mabenga, a town some 90 kilometres north of Goma.

Robinson said there was "a window of political opportunities at the moment" to seek a stop to the fighting.

Peace talks between the rebels and government, held in the Ugandan capital Kampala, have been virtually deadlocked since they started at the end of 2012.

"We are ready to lay down our arms... if the Kinshasa government responds to our legitimate demands," M23 spokesman Vianney Kazarama told AFP.

Robinson met the governor of North Kivu province, Julien Paluku, who for his part said the peace talks were "inopportune" and called for the M23 to disband.

Robinson also spoke with residents affected by the violence.

"What happened here in Goma is terrible. I'm glad that calm has returned," Robinson said on her arrival at the airport.

"I have come for the people of Goma, the women, the children. That is what is important."

Her visit also came after fresh UN accusations last week that neighbouring Rwanda has been actively backing the rebels.

On Thursday, the UN said it had "consistent and credible reports" of Rwandan troops entering DR Congo to support the rebels.

Rwanda's Tutsi leadership has always flatly denied supporting the M23, a group launched by Tutsi ex-soldiers who deserted from the Congolese army last year to turn their guns on their comrades.

"Rwandan troops are not in DRC (yet), when they are, you will know," she wrote on Twitter.

On Thursday delegates from 11 countries in the region will meet in Kampala, with special envoy Robinson in attendance, in the latest of a series of attempts to restore peace to eastern DR Congo.

Robinson is then due to travel to the Rwandan capital Kigali on Friday.

The UN envoy said she would have "no problem" involving Rwanda in direct talks aimed at ending the conflict.

Eastern DR Congo was the cradle of two wars that wracked the vast central African country between 1996 and 2003, drawing in armies from a large swathe of Africa that fought in part over access to vast mineral wealth.