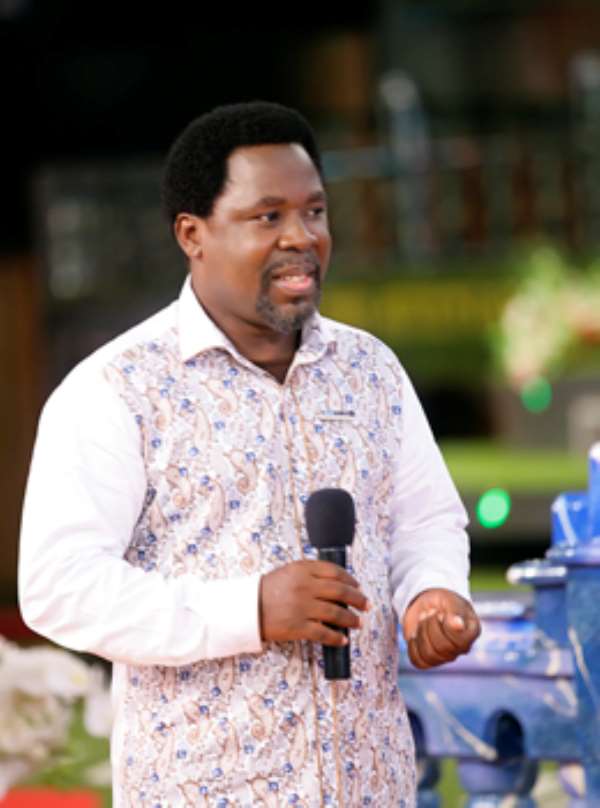 According to a report in UK's Guardian Newspaper today, Nigerian Prophet T.B. Joshua's popularity exceeds even that of famous London landmarks Buckingham Palace and the Tower of London.

According to the report by The Guardian's West African correspondent Monica Mark, 'In Africa's largest metropolis, the district of Ikotun Egbe has turned into a boom town. The draw? Temitope Balogun Joshua, one of Nigeria's richest "super-pastors", whose church attracts 50,000 worshippers weekly - more than the combined number of visitors to Buckingham Palace and the Tower of London.'

The article titled, 'Lagos businesses cash in on lure of super-pastor TB Joshua,' chronicles the enterprising antics of local businessmen and hoteliers who are utilising Joshua's popularity and the scores of foreign worshippers flocking weekly to The Synagogue, Church Of All Nations (SCOAN).

According to the Guardian, 'Sparkling new hotels rise incongruously among the shacks. At one, a new chef has recently been employed. 'He can cook food from Singapore, because we were having a lot of guests from there who struggle with Nigerian food,' says the manager, Ruky, at a reception desk framed by pictures of Joshua.'

Last month, Nigerian Punch Newspaper similarly reported the rise in business around Ikotun-Egbe, courtesy of The SCOAN's unique services. The article, titled, 'TB Joshua's neighbours convert homes to hotels', explained how homeowners close to the church were leaving the vicinity in droves to live elsewhere while renting out their houses to foreign visitors. According to the reports, international calling centres with foreign visitor discounts are also doing a roaring trade, alongside plastic chair rentals that cater for church overspill.

The SCOAN has been hailed for its impact on Nigerian tourism, recent statistics from the Nigerian Immigration Service revealing that out of every ten foreign travellers coming into Nigeria, six of them are bound for The SCOAN.