Comprehensive Report: How Ghanaian Players Fared Across The Globe Over The Weekend 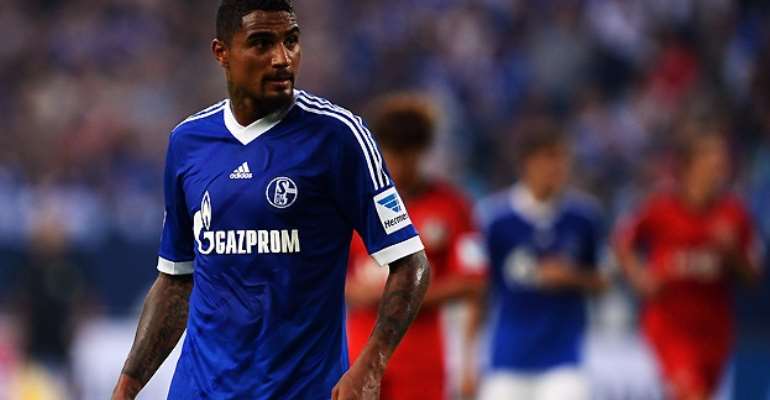 K-P Boateng made his debut for Schalke 04 on Saturday

Kevin-Prince Boateng marked his debut for Schalke 04 in the German Bundesliga and helped them record their first win of the season.

Striker Samuel Afum scored a goal of the week contender for Young Boys in their 2-1 reverse at FC Basel while Kwame Amponsah-Karikari, Richmond Boakye-Yiadom, Emmanuel Agyemang-Badu, Ernest Asante and King Osei-Gyan all got on the score-sheet.

There's a comprehensive report on how Ghanaian players fared across the globe reported by Ghanasoccernet.com's Akyereko Frimpong Manson.

ENGLAND
Arsenal stretched their unbeaten run to three games after recording a slim 1-0 win over Tottenham Hotspurs in the North London derby at the Emirates Stadium.

Crystal Palace cruised to an emphatic 3-1 victory over Sunderland at the Selhurst Park to register their first win of the season.

In the Npower Championship, former Chelsea U20 captain Nana Ofori-Twumasi was an unused by Yeovil Town who suffered 1-0 home loss to Reading at the Huish Park Stadium.

Jeffrey Schulpp lasted 75 minutes for Leicester City who were beaten 2-1 at Charlton Athletics.

Birmingham City and Ipswich Town split the points in a nail-biting 1-1 stalemate at the St Andrews Park.

There was no Koby Arthur in the Birmingham City side.

Albert Adomah lasted the entire the entire duration of the game for Middlesbrough in their 1-1 draw with Sheffield Wednesday.

In the League One, Abdul Osman played the full 90 minutes for Crewe Alexandra who were disgraced 5-0 by Swindon Town.

Patrick Agyemang played 63 minutes for Portsmouth who were defeated 2-0 by Chesterfield in the League Two.

GERMANY
Star midfielder Kevin-Prince Boateng marked his debut for Schalke 04 and helped them to record a comfortable 2-0 win over Bayer Leverkusen on his Bundesliga return.

In the Bundesliga II, full-back Baba Abdul Rahman played the entire 90 minutes for Greuther Furth when they drew 1-1 against FSV Frankfurt on Saturday.

German-born Marcel Appiah was a pillar in defence and lasted the entire regulation minutes for Arminia Bielefeld in their 4-2 win against Fortuna Düsseldorf.

In the Liga 3, Evans Nyarko saw full time action for Borussia Dortmund II in their 2-0 defeat at Chemnitzer FC.

Phil Ofosu-Aryeh helped Rot-Weiß Erfurt to beat MSV Duiburg 3-1 as he played the full 90 minutes for them.

Erich Berko lasted 70 minutes for Stuttgart II when they were beaten 2-1 by Hallescher FC.

ITALY
Kwadwo Asamoah maintained his place in the Juventus starting 11 and lasted the entire duration of the game for the Bianconeris as they posted a 4-2 win over Lazio to pick all six points available from two games.

Maxwell Acosty Boadu marked his debut for Chievo Verona in the Serie A after coming off the bench to replace Alessio Sestu in the 70th minute in their 2-0 loss against Napoli.

Udinese coasted to a 3-1 victory over Parma on Sunday's early kick-off and it was Ghana's Emmanuel Agyemang-Badu who scored the opener for the Udinese in the 12th minute.

Midfielder Afriyie Acquah was an unused substitute and he warmed the bench for Parma.

Livorno recorded an emphatic 4-1 win at Sassuolo.
Ghana new boy Raman Chibsah started the game but was replaced at the 76th minute by Sassuolo while Alfred Duncan was introduced with 8 minutes of normal time left for play.

Sulley Muntari was in a scintillating shape for AC Milan when they nailed Cagliari beating them 3-1 at the San Siro.

Isaac Cofie was unused by Genoa who were trounced 5-2 by Fiorentina.

Catania had would-be Ghanaian Kingsley Boateng on their bench.

In the Serie B, Ghana defender Masahudu Alhassan played the full 90 minutes for Latina when they drew 1-1 with Avellino.

SPAIN
Ghanaian starlet Fatau Mohammed was unused by Granada FC who shared the spoils in a 1-1 draw against Celta de Vigo.

Richard Boateng was not in the Granada first team squad.

In the Segunda Division, Atletico Madrid loanee Thomas Partey  did not played for Real Mallorca in their 3-0 humiliation at Sporting Gijon.

In the Segunda B, Midfielder Paul Quaye lasted the full 90 minutes for Espanyol II in their 0-0 draw with Badalona.

Goalkeeper Razak Brimah manned the post for CD Guadalajara when they lost 1-0 at Cadiz.

AS Monaco halted Olympique Marseille after beating them 2-1 at the Stade Velodrome.

Andre Ayew displayed an impressive performance for Marseille and played the full 90 minutes while Jordan Ayew played the last two minutes of the game.

Defender John Boye came off the bench just after the 13th minute mark for Stade Rennes in their 0-0 draw with Lille.

He was booked in the 59th minute.
Shadrach Eghan played 88 minutes for FC Twente in their 1-1 draw with Heerenven.

Kwame Quansah was a full timer for Heracles Almelo in their 1-0 win over ADO Den Haag.

Matthew Amoah missed the game with injury.
Mawouna Kodjo Amevor warmed the bench for Go Ahead Eagles in their 4-1 win at RKC Waalwijk.

Memphis Depay saw 58 minutes of action for PSV Eindhoven in their 0-0 draw against Cambuur.

Defender Johan Kappelhof jealously manned the defence for Groningen who held Ajax Amsterdam to a 1-1 draw.

Erixon Danso scored the second goal for Dordrecht in their win over Jong PSV in the Dutch second-tier league.

TURKEY
Defender Jerry Akaminko was influential for Eski?ehirspor in their 0-0 draw against Galatasaray.

Kwame Amponsah-Karikari scored his fourth goal of the season for Bal?kesirspor in their 3-0 win on Sunday.

RUSSIA
Abdul Majeed Waris was a second half substitute for Spartak Moscow in their 2-1 win over Tom' Tomsk in the Russian Premier League.

Rabiu Mohammed played full throttle for Kuban Krasnodar when they held Krylya Sovetov to a 0-0 draw.

PORTUGAL
Defende David Addy was booked in the 19th minute and lasted the full match for Vitória Guimarães in their 4-1 home defeat by Vitoria Setubal.

Haminu Dramani played 72 minutes for Gil Vicente in their 1-0 win over Sporting Braga.

Alhassan Wakaso played in central midfield for Rio Ave but he could not help them avoid a 1-0 defeat against Arouca.

Defender Jerry Vandam was unused by Mechelen.
Nana Akwasi Asare was influential for KAA Gent in their 1-0 win over Mons.

Daniel Opare continued his impressive display for Standard Liege as he lasted the full 90 minutes in their 2-0 win on Sunday.

Frank Acheampong saw 65 minutes of action for Anderlecht who suffered a 4-3 defeat at Zulte-Waregem with nine men.

Bennard Kumodzi held the midfield for KRC Genk in their 1-1 draw against Sporting Charloi.

Abraham Kudemor was also in full time action for Sporting.

Enoch Adu-Kofi played 88 minutes for Cercle Brugge in their 2-1 win at Waasland-Beveren.

CYPRUS
Former Ghana first choice goalkeeper Richard Kingson marked his return to top-flight action after manning the post Doxa and helping them to a 2-0 win over Nea Salamis.

DENMARK
Davidson Drobo-Ampem was a pillar in defence for Esbjerg who held Midtjylland to a 1-1 draw. Defender Kolja Afriyie watched the entire game from the Midtjlland bench.

Defender Dominic Oduro watched from the bench as his AGF beat OB 6-3.

Nordsjælland suffered a 2-1 home reverse to Vestsjælland.   Kamal Isaah was brought on after 79 minutes.

Danish-born Kevin Mensah grabbed the consolation goal for Viborg in their 4-1 home defeat to København.

SOUTH KOREA
Derek Asamoah played for Daegu but could not help them avoid defeat against FC Seoul.

Gilbert Koomson came off the bench in the 57th minute to play for Sogndal.

Defender Razak Nuhu was an unused substitute.
Ernest Asante scored the fourth goal for IK Start in their 7-0 demolition of Sandnes Ulf.

Rashid Sumaila played in central defender for Mamelodi Sundowns in their win over Golden Arrows.

SWITZERLAND
Samuel Afum came off the bench to score the opening goal for Young Boys but they surrendered and lost 2-1 to FC Basel in the Swiss Super League.

Winger Ishmael Yartey missed the game due to injury.

SWEDEN
Nasiru Mohammed did not travel with BK Hacken who drew 1-1 at Mjallby.

Benjamin Fadi was axed from the Malmo FF side that drew 1-1 against Oster.

Ibrahim Moro and Robinson Quaison started for AIK while defender Ebenezer Ofori watched the game from the AIK bench.

Neither Ema Boateng nor David Accam were involved in Helsingborg's 4-2 win over Brommapojkarna.

UKRAINE
Dominic Adiyiah played the full 90 minutes but could not help them avoid defeat against FC Zorya.