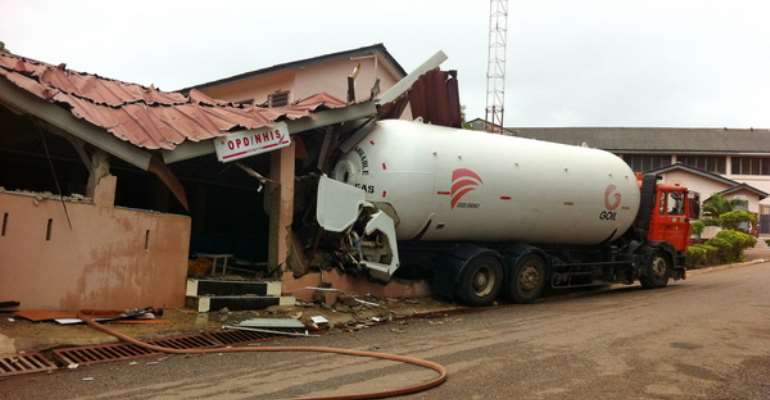 A major disaster was averted on Saturday morning after a 15,000-tonne capacity LPG tanker rammed the Out-Patient Department (OPD) of the Takoradi Hospital and leaked gas into the rooms.

The incident forced a shut-down of the hospital for hours as hospital authorities struggled to evacuate patients on admission in wards located above the OPD.

No one was injured, however, the entire OPD was destroyed, along with patients' records.

The tanker had just finished discharging gas to the hospital for use at its kitchen at about 9:30am, when in an attempt to reverse down the sloping road, the steering and break system jammed.

According to the driver, Kobina Fobih, the vehicle, a Renault tanker with the registration number GN 2963-10, ran down the slope at an uncontrolled speed, skid a gutter before ramming into the OPD where about seven people including attendants were.

A loud thud from the impact sent people running for dear life, and gas from the tanker soon started leaking into the rooms including the kitchen where fortunately, there was no fire.

They also sprayed a foamy substance on the tanker and its immediate surroundings while safety officers went to the residential facilities nearby to warn of the danger and ensure there was no naked fire.

It took the team more than four hours to move the vehicle out of the collapsed OPD to a nearby Ghana Oil Company (GOIL) depot to discharge the gas safely.

The emergency unit of the hospital has since been reopened, however officials said they would have to look for an improvised structure to serve as OPD.

Eye witnesses to the accident said the tanker had struggled to climb the slope amidst a loud noise from the engine.

Officials of GOIL from whose premises the product was lifted assured the hospital of support to ensure operations returned to normalcy.

The Takoradi Depot Manager of GOIL Mr Stephen E. Asare said the product had been safely discharged and that they would be investigating the cause of the accident.

Alliance of CSO petitions Parliament for audience with GNPC ...
5 hours ago