Has The Supreme Court Dispensed Justice Intelligently and Truthfully? 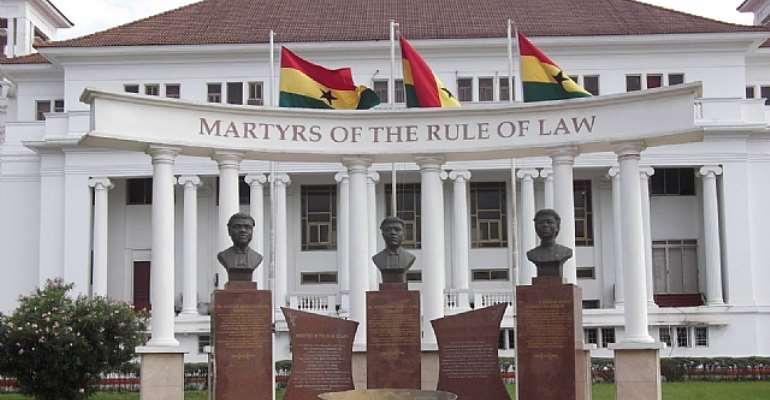 My daughter, born in Europe and a Law graduate from a University in the UK constantly warned me as following, 'Dad, the Supreme Court justices cannot remove the President from office. They will never give the presidency to Nana Akufo Addo'.

I had not always been happy when in the face of all the evidences produced and gathered, she kept saying that. Even thirty minutes to the Supreme Court judges pronouncing their most shameful verdict, she repeated it. When I questioned her why she kept holding that strong belief, she frowned her face and said, 'Dad, Ghana and the entire Africa are not ready for true democracy so the judges will never tell the truth in this case'

She immediately left home with her siblings to go shopping and lo and behold, what she had always said to my distaste happened like a thunderbolt in a cloudless sunny day a few minutes later.

She again said if Ghanaians were serious as a people, they should not have allowed Justice Atuguba to sit on the case let alone, becoming the nine-member panel's Presiding judge. She said Justice Atuguba should have removed himself from sitting on the case once he knew he had personal interest in the case. His very nephew is one Dr Atuguba who works at the presidency.

Any sensible judge who is worth his salt would have done the honourable thing by recusing him or herself without being asked to. However, he did not only sit on the case but throughout the court proceedings, he glaringly exhibited his biases, unprofessionalism and partisanship shamelessly.

When I questioned my daughter why she felt Ghanaians should have removed him from sitting on the case, she said, 'In Uni (University), one of our lecturers said, there was a case coming up. A judge was appointed to preside over the case. Seeing that his wife has shares in the company he was going to try, he said he has interest in the case and so honourably recused himself before the public raised it'. In any such circumstances, it is only in the best interest of the judge to remove him or herself from sitting on the case. This is a requirement. Did Ghana or Justice Atuguba fulfil this sensible legal obligation? No!

Have we seen why most of the Ghanaian children born abroad although dark-skinned have Whiteman's brains and would not like to move to settle in Africa? How would they relocate to Africa with all these shameless persons and weak institutions abounding?

As said earlier, I have my reservations about the Supreme Court judgment. Unless they see things differently, unlike those of us that watched the court proceedings live on television, online or simply put, on the airwaves, the judges have failed the country. They have endorsed corruption and election rigging, period! They had better bury their heads in shame and live without ego until the Most Merciful God calls them home to face judgment themselves.

Any judge who might have been influence by bribe to act the way they did, may God and the gods of the land be their judge. May they be justly dealt with by the laws of God and the gods if the gods are not themselves as corrupt as most Ghanaians are, especially, Ghana's judiciary?

The Supreme Court judges had the perfect chance to demonstrate their integrity in this landmark case but as usual, they chose to confirm the corrupt image of the Ghana judiciary.

What I have learnt from the verdict is we cannot still trust the Ghana judiciary and all other institutions. They are all as weak as they are corrupt. Moreover, I will cease advising my children to relocate to Ghana as has always been my aspiration. May the shameless judges forever bear the guilt of my decision?

I am ashamed to identify myself as belonging in the same one-people-one-nation with a common destiny family with these Supreme Court judges. Do not get me wrong. I am not painting all the nine judges with the same brush but those that voted to kill the perfect chance presented to them on a silver platter to nail corruption forever.

I dedicate this write-up to my daughter (Gloria) and will now learn to respect her views. May all sensible Ghanaians share the joy and pain of this publication? Let us continue to trust in God but not in our roguish institutions and crook leaders, be they politicians or traditional leaders.

Lawyer Adreba, please take it easy. Let us all join hands to build Ghana. I shall find time to communicate my most helpful nation-building suggestions and solutions to President Mahama. He may choose to use them or abandon them. I will do my share as an active nation-loving citizen. Nonetheless, let me at the moment weep my eyes out. Leave me alone to emotionally pour out my heart and views.