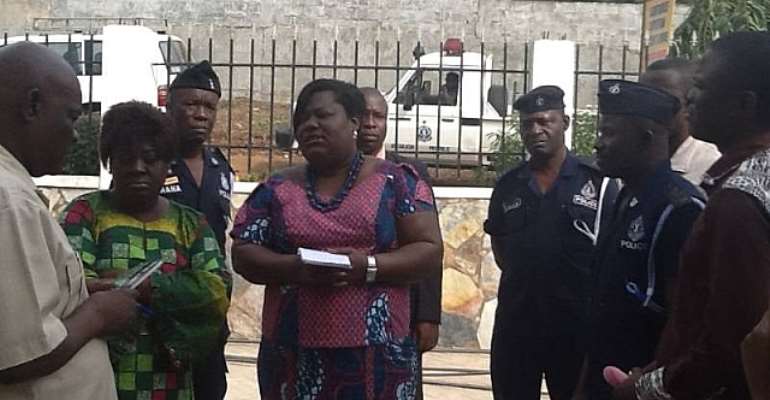 Aburi (E/R), Aug. 28, GNA - Nana Oye Lithur, Minister of Gender, Children and Social Protection has directed the care reforms and orphanages division of the Department of Social Welfare (DSWF) to register all orphanage homes with the department and police stations near them.

She also directed that the orphanages to register with the various Metropolitan, Municipal ad Distric Assemblies to ensure proper monitoring and documentation of their activities and that orphanages that do not comply with the directives should be close down after a circular has being sent to the various homes in a time.

Nana Oye Lithur gave the directive when she pays a working visit to the Light House Orphanage Home at Aburi in the Akwapim South District of the Eastern Region.

The home was attacked by an unidentified armed me who robbed and raped one of the caretakers in the homes and brutalize some of the children in the home.

She said this will give the social welfare department and the police the opportunity to conduct security risk assessment at the various orphanage homes in order to ensure that the children were protected and sleeping under safety environment.

Nana Oye Lithur has also directed the department to organize and makes available a clinical psychologist to take the children through counselling.

She said it was traumatic to hear and read the news in the media and that the Ministry of Gender will offer the home with some assistance in order to keep it running.

She assures the chief and the market women of Government commitment to protect the her citizenry to ensure economic development.

Lady Pastor Bridgette Marian Ogoe, Administrator of the Home said the incident happened at around 12 45am when she received a call from one of the elders inmates.

She therefore denied the publication in the Daily Graphic that the inmates in the home were rape.

Lady Pastor Ogoe said the caretakers and inmates who were brutalised were sent to the Mampong Tetteh Quarshie Hospital and were treated and discharge.

She said the robbers had made away all electrical gadgets which were easy to carry including mobile phones, ipad, and laptops and a sum of over a thousand Ghana Cedis.

Lady Pastor Ogoesaid some officer of the Domestic Violence and Victims Support Unit of the Ghana Police Service had also visited the home ascertain first hand information of the incident.

Mr Winston K. Afari-Djan, Akwapim South District Chief Executive also called on the natives of the area to report to the police quickly any suspecting individual or group of persons in the area.

Otoobour Kwasi II thanked the Government for its efforts to combat crime in the country and also thanked the Minister for showing up as quick as possible.

District Superintendent of Police (DSP) Agyenim Boateng, District Police Commander of the Area said the police were prepared to rescue the natives upon having quick information of any attack in the district and that his outfit were carrying out investigations.

He said two suspects in respect of the incident had being pick by his outfit and were sent to the Police Headquaters for further investigations.

The Light House Orphanage Home has 20 inmates comprising of 11 males and 9 females the ages of between two and half to 16.