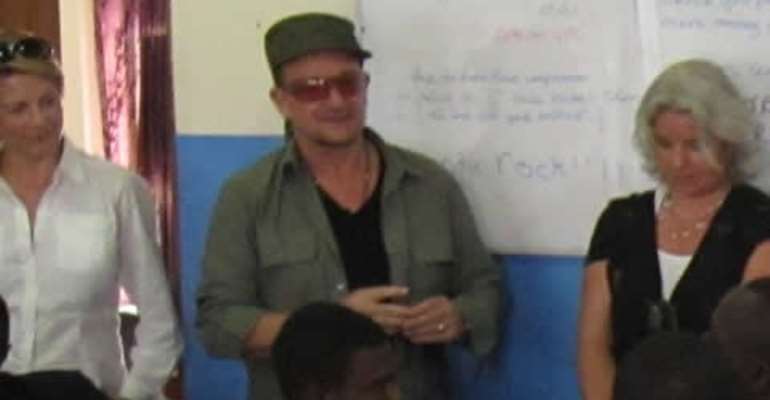 Bono is a transparency activist

Irish musician and transparency activist, Paul David Hewson, known popularly as Bono, and a delegation of business and political leaders, have met with Ghanaian entrepreneurs at the Meltwater Entrepreneurial School of Technology (MEST)to discuss ways of improving governance with digital innovation.

More than 70 Ghanaians and foreign entrepreneurs joined the U2 lead singer and co-founder of The ONE Campaign for the session - including mPedigree's Bright Simons, Edward Amartey-Tagoe of Nandimobile and Eyram Tawia of Leti Games.

A Chief of Staff under the John Kufuor Administration, Mr. Kojo Mpianim and Senior Communications Specialist at World Bank Ghana Office, Kafui Kofi Tsikata were also there to offer their insights on how technology can improve transparency and fight corruption.

Speaking to Myjoyonline.com after the session on Wednesday August 27, Bono said he was enthused with the progress Ghanaian entrepreneurs have made in the development of technology initiatives.

"Technology is turbo-charging development in Ghana...you hear just speaking about ipaidabribe.com, because in West Africa simply just getting across the different borders people are being slowed down, made to pay bribes [but with this innovation] you can text to explain your bribe", he noted.

Expressing his admiration for Ghana's efforts to fighting corruption, Bono also discredited the notion that corruption is only severe in Africa.

Bono and ONE have been working over the past few years with African partners to fight for greater transparency and accountability in development. The focus of their efforts is on increasing transparency in the extractive industry, and on how to increase international investment in Africa.

Bright Simons said although there are technological solutions seeking to solve situations in other spheres of the society, not much ideas have been dedicated to fighting corruption and improving governance.

"Listen to the radio, 50% of the things [we hear] are matters to do with corruption or incompetence or government competence depending on which side of the divide you are on", he stated.

Lauding the session he noted that it is time to promote the idea of using technology to improve governance and foster transparency.

He said African innovators must start thinking about using technology to solve complex issues like ethnocentricism and social cohesion.

"Can we develop technology solutions to solve some of these extremely complex issues or is it beyond technology? Those are the questions", Bright noted.

He was however optimistic there were enough good technology innovators in Ghana who can make a difference to improve governance.

Bono also believes "technology can play a huge part in eradicating extreme poverty. As well as building thriving businesses, it can be used to battle corruption by helping citizens hold corporations and governments to account. Transparency is the best vaccine against corruption, and harnessing the talent of these tech-savvy innovators could dramatically change the game against those trying to game the system."

Bono's ONE is a grassroots advocacy and campaigning organisation that fights extreme poverty and preventable disease, particularly in Africa.