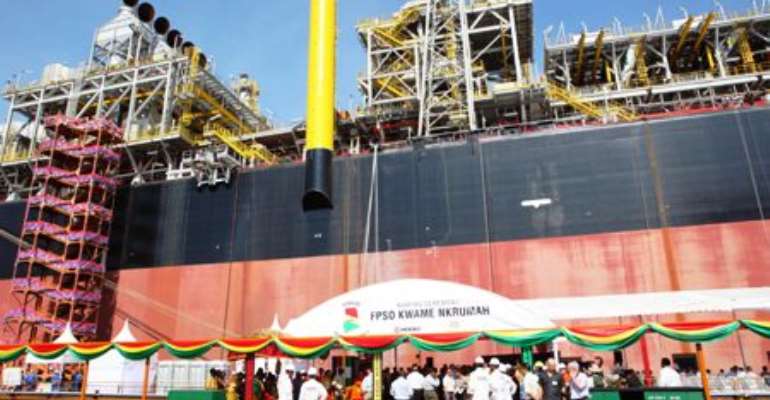 The Ghana Ports and Harbours Authority (GPHA) says the country is losing huge revenue because of its failure to place the offshore oil-exporting terminal, Floating Production and Storage (FPSO Kwame Nkrumah), under the operations of the authority.

Speaking to the Daily Graphic after the Parliamentary Select Committee on Finance had toured the Takoradi Port, the Director-General of Ports, Mr Richard Anamoo, said management of the facility, which is currently done off the coast of Ghana, should have been under the supervision of the GPHA.

Under the laws of the country, GPHA is the only institution mandated to plan, build and operate seaport facilities for exporting goods.

Mr Anamoo explained that the FPSO Kwame Nkrumah was a terminal which served as a platform for other vessels to load fuel, and for that reason, the facility ought to be classified as an offshore port which must not be made to operate independent of the country's port operations.

Accordingly, Mr Anamoo said services such as dynamic positioning system for offshore, tugboat/supply boat, navigational aid and other forms of services taking place at the FPSO must be provided by GPHA at a cost. 'As it is now, the terminal is operating independently which should not be the case,' he complained.

The Director-General said currently the operators were paying huge sums of money to private entities to provide such services.

For his part, the Director of the Takoradi Port, Capt. James Owusu-Koranteng, said the port was undergoing expansion and that a loan of 197 million euros which was approved by Parliament for the project was ready for disbursement.

He explained that the money would be used, among other things, for dredging of the access channel, extension of the breakwater, the construction of oil services terminals and for the purchase of plant and machinery.