Millennium City Schools Ready To Take Off By Next Academic Year 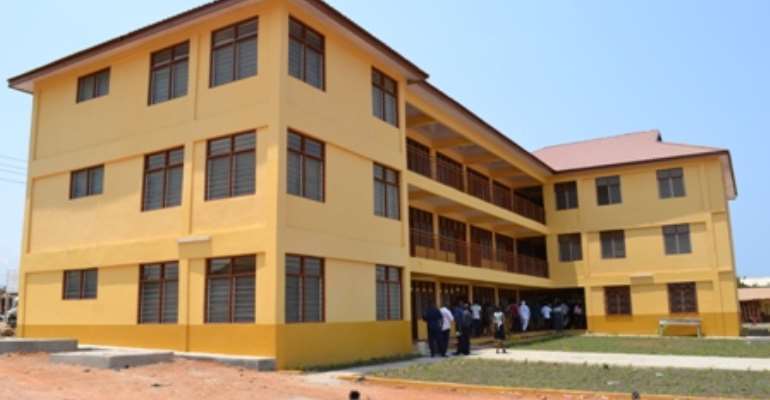 The schools according to the Accra Mayor are ready to be used by pupils for the next academic year which begins in September, 2013.

This came to light during an inspection tour of the various facilities by the Greater Accra Regional Minister, Hon. Julius Debrah in the company of the Accra Mayor and his entourage.

The completed schools include Zamrama Line, Abavana, Saleria and Okpoti which received support from the Chinese government, the AMA, the USAID, GETFund and the SIF. The schools contains 36 toilet facilities, library, staff common rooms, computer laboratory, science laboratory, head teacher's office and spacious classrooms of 40 pupils per each class.

Speaking to journalists Dr. Vanderpuije who was passionate about the need to improve and enhance education in the country, reiterated government's commitment to quality education and hence the effort of developing educational infrastructure through the city.

'I must be sincere to you all that all the facilities including computers, science laboratory equipments, furniture, library books and other teaching aides are all ready for the next academic year to begin,' he said.

He added, the new schools are among the 100 newly to be completed under the Millennium City Schools Projects within the Accra Metropolis.

He explained that the new blocks would accommodate the over 89,000 pupils who were accommodated in the 500 emergency temporary classrooms in 53 schools.

The Mayor disclosed that the USAID grants Ghana $2.3m for construction of basic school complexes in Accra, and the USAID, Plan Ghana initiated $11.2m project to support education in the country.

On his part, the Greater Accra Regional Minister Hon. Julius Debrah was elated about the AMA and the Mayor's efforts at the decision to abolish the shift system and expressed the hope that under the project, all the schools would be provided with modern computer labs and other learning facilities.

Mr. Debrah believes that the idea and the good initiatives of the Mayor would need to be replicated by government throughout the country to enhance quality education.

The Mayor expressed gratitude to the Government, USAID , the Chinese Government and other funders for their support and expressed optimism that the quality of education in the metropolis would be enhanced.

The Assembly has put modalities in place to upgrade the knowledge of teaching and non-teaching staff through comprehensive training in the various syllabi to prepare them adequately enough for the Millennium city schools establishment, he reveals.