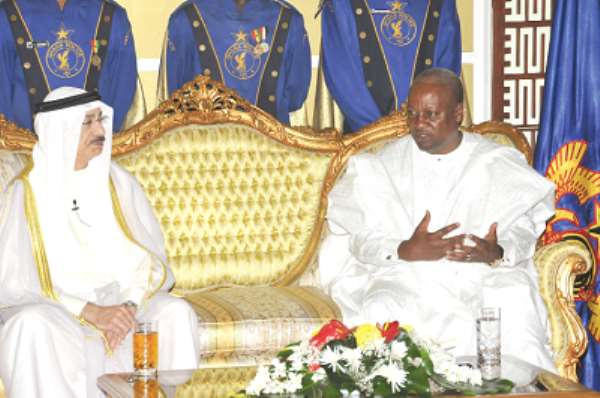 President John Dramani Mahama has called on the leaders of Africa and the Arab world to collaborate to resolve the political crisis in Egypt and Tunisia.

He said the conflicts had a direct bearing on the fortunes of the whole of Africa, since Egypt and Tunisia were important players on the continent.

President Mahama made the call at the Flagstaff House yesterday when he received the letters of credence from the Envoy of Kuwait, Mr Fayez Mishal Al-Jassim.

Also at the seat of government to present their letters of credence were Mr Jong Yong Chol from the Democratic People's Republic of Korea; Mr Alex V. Lamadrid from The Philippines and Mr Sylver Aboubakar Minko-Minseme from Gabon.

North African Crisis
The President expressed worry over the raging crisis in North Africa and mentioned Libya as one of the biggest casualties.

He said it was unfortunate that Egypt and Tunisia were also experiencing serious political tension, resulting in the loss of lives.

''There is room for Africa and the Arab world to collaborate to resolve the crisis to achieve peace in the entire region,'' he said.

Touching on Ghana-Kuwait relations, President Mahama said relations between the two countries dated as far back as 1975 when Kuwait supported Ghana with some funding for the construction of the Kpong Hydroelectric Dam.

He said recently Ghana and Kuwait had signed an agreement for the release of $50.3 million for the construction of an acute care trauma centre at the Korle-Bu Teaching Hospital in Accra.

He asked Kuwait to share its rich experience in the oil and gas sector with Ghana.

In his response, Mr Al-Jassim assured Ghana of his country's preparedness to extend its knowledge in the two sectors to the country.

He also promised to pursue programmes to deepen trade and diplomatic relations between Ghana and Kuwait.

Korea Peninsula
When the Ambassador of the DPR of Korea took his turn, President Mahama called for the resumption of the six-nation talks geared towards normalising relations between North Korea and South Korea.

He said peace was needed on the Korean Peninsula to promote peaceful coexistence and trade between the peoples of the neighbouring countries.

The President noted that while Ghana and North Korea enjoyed strong diplomatic relations, trade between the two countries was very minimal.

He, therefore, called for trade relations between the two countries to be strengthened.

Consequently, he said, the government of North Korea was willing to deepen diplomatic and trade relations with Ghana.

Ghana/ Gabon Relations
Welcoming the Ambassador of Gabon, the President said both Ghana and Gabon had offshore oil operations and indicated that the two countries could share experiences in that regard.

The two countries could also collaborate in the timber industry, since they both had timber resources, he said.

In his response, Mr Aboubakar said Gabon saw Ghana as an economic model and indicated that the President of Gabon, Mr Ali Bongo, wanted to visit Ghana as a way of bringing the two countries closer.

Ghana/Philippines
Receiving the Ambassador of The Philippines, President Mahama said although Ghana and The Philippines enjoyed diplomatic relations, trade co-operation between the two countries was insignificant.

He noted that about 2,000 Filipinos were resident in Ghana and called for the enhancement of trade relations between the two countries.

Mr Lamadrid said The Philippines had expertise in the areas of port expansion and mining, adding that his country was ready to collaborate with Ghana in those areas.