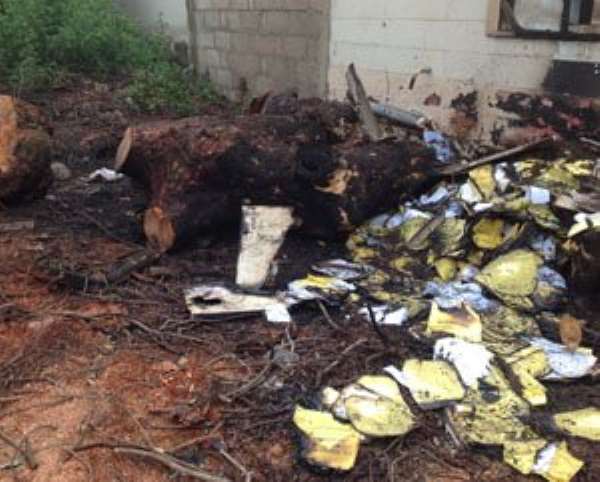 The Diabetic Centre of the Korle Bu Teaching Hospital caught fire yesterday destroying medical records of a number of patients.

The fire which started at about 4:00am was detected by some staff members on duty and patients on admission at the centre who tried to quench the fire while some called the Ghana Fire Service.

Mustapha Salifu, head of Public Relations at the Hospital told the DAILY GUIDE that the fire destroyed about one-third of the records of over 5,000 patients which are kept in paper folders in wooden shelves.

He however said the data of patients whose records were consumed by the fire would be able to access health service since the hospital had recently started a process of transferring all records of patients into an electronic format.

When DAILY GUIDE visited the scene, yellow folders and papers which were either half burnt or completely consumed by the fire as well as logs and partially burnt tree stumps had taken over the floor.

As at 6:00am, the fire had completely been quenched but passers-by trooped to the place to catch a glimpse for themselves.

'There was no casualty,' he said and explained that the fire spread from the burning of tree stumps behind the Diabetic Centre which were being cleared to make room for the construction of water reservoir as part of plans to improve the water supply at the hospital.

He said workers from the Environmental Health Unit of the hospital who had been tasked to clear three trees behind the centre 'set fire to the tree stumps but it appears the fire was not properly put out and it reignited and spread to the medial record section of the centre.'

He explained that the Environmental Health Unit is mainly in charge of tree planting, felling of unwanted tress and land scarping at the hospital.

The Public Relation Officer said the fire first caught the mosquito net of the window of the building close to the trees and spread to folders of patients.

Mr Salifu said the burnt data of patients would be retrieved 'from our e-data backup,' adding, 'We have recreated hard copies of folders for all patients and so the fire has not distracted service at all'.

He said temporary folders were issued for patients whose folders could not be traced shortly after the fire, while the Information Technology Department of the Hospital took time to retrieve clinical data from electronic backup, which stores records of all patients.

In the meantime, Mr Salifu said the Chief Executive of the Korle Bu Teaching Hospital has called for an investigation into the cause of the fire.

He said after reviewing an official report from the Environmental Department of the Hospital, 'anybody found culpable will not go unpunished.'

Mr Salifu assured the public that there was no cause for alarm, and that Korle Bu Teaching Hospital had instituted measures such as acquisition of fire extinguishers, regular fire drills for its staff as well as the stationing of fire officers at the hospital to ensure fire safety.

Unconfirmed report indicated that though the hospital had a fire station, the fire tender could not be used since there was no water.

Prince Billy Anaglatey, deputy public relations officer of the Ghana Fire Service said the distress call was received at about 5:00am and officers were dispatched from the Mokola branch.

The fire officer brought the fire under control in about 20 minutes after arriving at the scene when patients were running for their lives.

He said preliminary investigations have indicated that the fire was started by the burning of tree logs.

'But investigation will still continue to come up with a full report on the cause,' he said.