Kalu And The Three Journalists 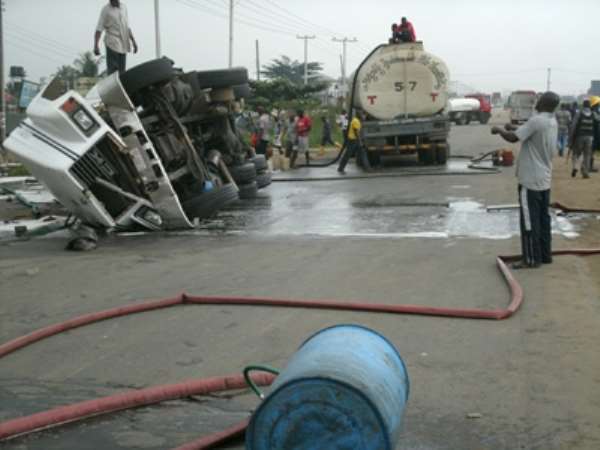 What those who are grieving need from their friends, well-wishers and family members is just companionship. Although, in the case of death, due to how expensive it is to plant the dead to the soil in most parts of Nigeria, many families cry out so-loud, where there was scarce money to host the funeral.

To Dr. Orji Uzor Kalu, he has always been there both as a companion and a donor, for the grieving members of the society. But, most especially, for the ones that came to his notice.

If it was possible for Kalu to bring back to live, the three members of the Nigeria Union of Journalists (NUJ), whose vehicle crashed on August 2, while on an official assignment and they perished, he would have done.

It was a heart-piercing testament from Kalu to the union and members of the families of the deceased that attested for that. Tears were rolling down the jaws, as one reads Kalu's concern message. He made the general public to believe that the three dead journalists will continue to live in our hearts.

Kalu was typically concerned that the deaths of those who contributed meaningfully to the growth of their immediate society and the extended communities, when they were alive, can never be forgotten.

It was not gainsaying the fact that Kalu told the Nigeria Union of Journalists (NUJ), not to despair, but see its once members, who died, as persons who fought a good cause. Known for his encouragement in situations like this, Kalu had also admonished the members of the NUJ, not to over flog their spirits, as the three victims did not die in shame and vein.

There was evidence of those who sustained injuries in the accident, and Kalu had bemoaned that all who were involved in the accident, can never be forgotten. As a Christian that Kalu is, his language to those who are mourning is that while they mourn, there are people up there, who are very joyous to welcome those we see that are dead, to heaven.

It is always a man like Kalu who can demonstrate such a rare behaviour, by sending his condolences from Harare, Zimbabwe, where he had gone to observe that country's elections, as one of the African Union Election Observer Mission, not that he holds any political appointment in Nigeria. So, imagine what he could have done if he was in a public office. Your guess is as good as mine.

Kalu is a patriot, who exhibits in his attitude that a statesman is accentuated by the love of his country and people; Dr. Orji Uzor Kalu is always on track!

We know that death leaves heartache, but with such heartfelt words of Kalu, healing of the broken heart is sure; just as the once newsmen healed different peoples with their exceptional commitment to their profession.

Those that Kalu heard about their sudden demise that nearly pulled him out from his AU mission were Kafayat Odunsi of the Nigerian Television Authority; Adolphus Okonkwo of the Voice of Nigeria and Tunde Oluwanike of the Federal Radio Corporation of Nigeria.

Our one-time dear friends and colleagues perished on the Ilesa-Ife Road, around Osu in Osun State. Like Kalu, we must continue to cherish the memory of the departed, who left blueprints on earth. It is obvious that the welfare of newsmen anywhere in the world is paramount to Kalu.

What is the worth of human life! It was not certain what caused the accident, since the vehicle that the journalists were travelling in, was said to have been donated to the NUJ, about eight months ago. This means that it was a 'new' vehicle.

Therefore, it behooves Kalu to tell the authorities, since his voice can be easily heard, than most of us, that the accident might not be unconnected with road unworthiness in the country. Let Kalu tell the authorities that they should not take Kilimanjaro period for the roads and their safety in this country to be gotten right; a country that was blessed by nature, but cursed by man.

We expect that as a result of these deaths and the ones before them, the authorities are supposed to put the roads in place, especially all the Federal roads and the Highways. Let this country work like concrete soup on its roads.

The Federal Road Safety Corps or whatever the name is, is just mumbo-jumbo and titular. It is incomprehensible to majority Nigerians that with this Commission, the safety of Nigerians is assured on the roads.

Kalu should also advise drivers to always take caution and make sure they do not drink, lack sleep or defocused while driving, pending when the country that the administrations are in shambles, would stabilise.

Nigerians should thank Kalu for his compassionate and charitable heart for being a friend, companion, donor, uncle, nephew and father to those who are grieving.

According to sources that Onwumere interviewed at the scene, the accident happened when the tanker was dodging a Port-Harcourt-based company's van that was coming from opposite direction. This accident happened just opposite the old School-To-Land, Aba/Port Harcourt expressway, Iriebe, Rivers State. Fire Service and Police were on ground and prevented people from coming to scoop the fuel as was the case.

Vehicles and motorcycles were also prevented from using the road to avoid a spark. Another tanker was stationed for a trans-load of the products, since the content in the capsized tanker didn't throw away.

The story was that if the authorities had reconstructed the expressways, the company's van would not have used 'one-way' leading to the tanker having the mishap around 5am on this day.