Illegal miners at Konongo-Odumasi are dying from lung infection 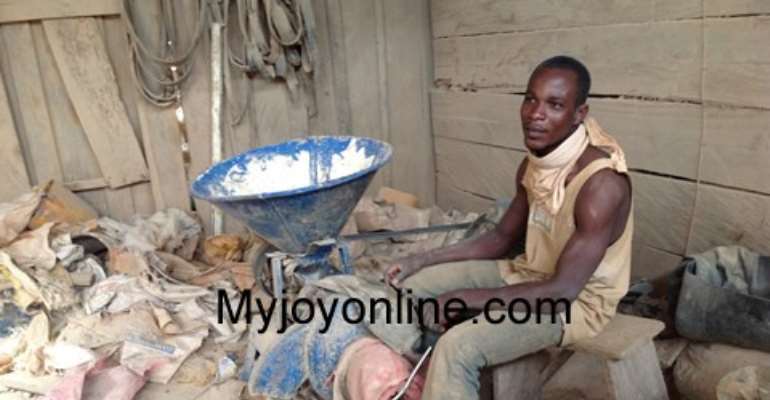 A miner at his shop

Illegal miners in the Konongo-Odumasi area in the Ashanti Region are gradually dying from a lung infection known as silicosis but other miners insist the deaths are results of curses. An estimated number of 40 miners have died within five years.

According to medical experts, silicosis or hardening of the lungs is caused by the prolonged inhalation of silica dust from the grinded rocks. After inhalation, a process called fibrosis (hardening of lungs) starts and with time, depending on the immunity of the patient, the condition spreads through the lungs consequently impeding breathing and exposing the lungs to other infections like tuberculosis resulting in death.

Speaking to Luv Fm, Dr. William Thompson, an administrator at the Agogo Teaching Hospital stated that most the patients are galamsey workers and those who work in the mills where stones are ground.

One of the infected miners who was diagnosed about five years ago told Luv Fm that he and his other colleagues ignored advice to wear protective covering because they felt it was a hindrance while working. They started wearing them when people started dying but it was too late for him. He stated that though his cough has improved but he still finds it difficult to breathe.

The symptoms have been the same for all who have died. A visit to the Konongo-Odumasi Zongo areas showed that most of the households have lost many family members. Some of the residents are bedridden and in chronic stages of the disease.

According to some of the inhabitants, it is curse on the miners who steal from their bosses. One miner admitted to Luv fm that it is a curse and testified that he has worked in the mill for years and has not been infected. He said the curse is as a result of stealing from the people they work for.

Officials at Municipal Health Service Directorate refused to speak on the matter but an officer claimed the Directorate is unaware of the disease.

Chiefs and Queen mothers of Nadowli-Kaleo congratulate Alban...
27 minutes ago

I intend to live my my oath – Bagbin
27 minutes ago