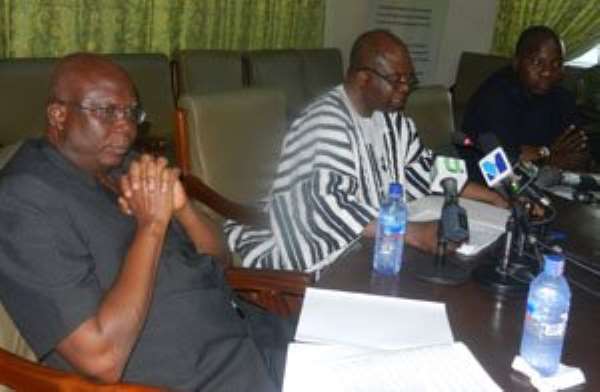 The Ministry of Agriculture has debunked claims by the minority in Parliament that Ghana's agriculture sector is declining.

He said in the past four years, the performance of the agricultural sector which comprise crops, cocoa, forestry, fisheries and livestock as measured by the value of Agricultural Gross Domestic Product had increased from GH¢5.3 billion in 2007 to GH¢6.6 billion in 2012, representing 24 percent rise.

On the issue of alleged stagnant food production, the Minister said 'staple food production in 2011 was significantly higher than it was in 2008 and the country has achieved food self-sufficiency with grains and starchy staples, 'just travel around the country and you will see food stocks locked up waiting for evacuation.'

On fisheries, the Minister admitted the declining fisheries capture, but blamed the previous government for failing to pass regulations to manage the sector making it 'difficult to prosecute offenders engaged in illegal fishing in the country.'

To increase agricultural production, he said government between 2009 and 2012 added 77 mechanization service centres to the 12 set up by the previous government.

The Minister stated that a $95 million concessional line of credit had been secured from the Brazilian government to support agricultural mechanization in the country.

Mr Humado who debunked the NPP MP's claim on the high farmer to extension agent ratio and put the figure at 3000 farmers to one extension officer, as a gross misrepresentation of the facts on the ground and could not give the current figures said 'the Ministry has embarked on serious recruitment and replacement of staff for the various District, Municipal and Metropolitan Agricultural units to reduce the extension agent to farmer ratio, 15000:1'

He said the Ministry in collaboration with the World Bank was piloting an electronic extension website to provide agricultural extension services to farmers and other stakeholders.

It would be recalled that the minority in Parliament led by its spokesperson for Food and Agriculture, Dr Owusu Afriyie Akoto told journalists in the 2013 budget, the NDC government allocated a paltry GH¢340.8 million to the Food and Agriculture Ministry for its programmes which could not even turn around agriculture in the Northern Region, alone let alone the whole Ghana.

'What makes the situation worse is that the allocation is facing perennial problem of uneven releases whereby budgetary funds are held up during these critical months of the farming season, that is, June, July and August.'

He said fish stocks and catches had dwindled over the past 10 years and fishermen are currently complaining about low catches and returns.

He said agriculture under the NDC government had failed miserably with 'Dutch disease staring us in the face.'

'We are going to be afflicted by the Dutch disease now that the country is producing oil because all the investors as well as the government are turning their attention to the oil sector, while the agricultural and manufacturing sectors have been neglected,' he said stressing that  such a situation would result in massive poverty in the rural areas and also massive unemployment.