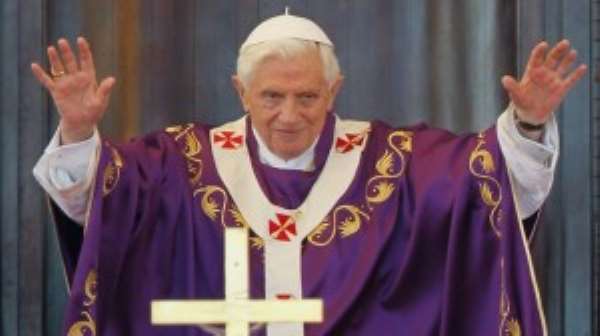 Former Pope Benedict has said he resigned after “God told me to”, during what he called a “mystical experience,” a Catholic news agency reported.

Benedict, whose formal title is now Pope Emeritus announced his shock resignation on February 11 and on February 28, became the first pontiff to step down in 600 years.

“God told me to do it,” the Zenith agency quoted Benedict as saying to a visitor to the convent in the Vatican gardens where he is living out his retirement in near isolation.

According to the agency, Benedict told his visitor, who asked to remain anonymous, that God did not speak to him in a vision but in what the former pope called “a mystical experience.”

According to Italian media, Benedict's decision to step down was influenced by the various scandals that blighted his eight-year papacy, including the arrest of his personal butler for leaking private documents alleging corruption in the Vatican.

He was succeeded by Pope Francis, the former Cardinal Jorge Mario Bergoglio of Argentina, who was elected as the first non-European pontiff in 1,300 years.

According to the Rome-based Zenith, Benedict told his visitor that the more he observes the way Francis carries out his papal duties, the more he realized the choice was “wanted by God.”

Last Sunday, Benedict spent a day at the papal summer retreat at Castel Gandolfo, south of Rome, to escape the heat of the capital.

The visit indicated that the 86-year-old ex-pope's health was good enough for him to travel. There had been media reports that since his resignation, Benedict's health had deteriorated dramatically. Reuters

* On February 11, 2013, former Pope Benedict announced his resignation from the papacy.

*On February 28, 2013, Pope Benedict stepped down, becoming the first pontiff to step down in 600 years.

*According to Pope Benedict, God told him to resign from the papacy during what he called “mystical experience.”

*He was succeeded by Pope Francis, the formal Cardinal Jorge Mario Bergoglio of Argentina who was elected as the first non-European pontiff in 1,300 years.