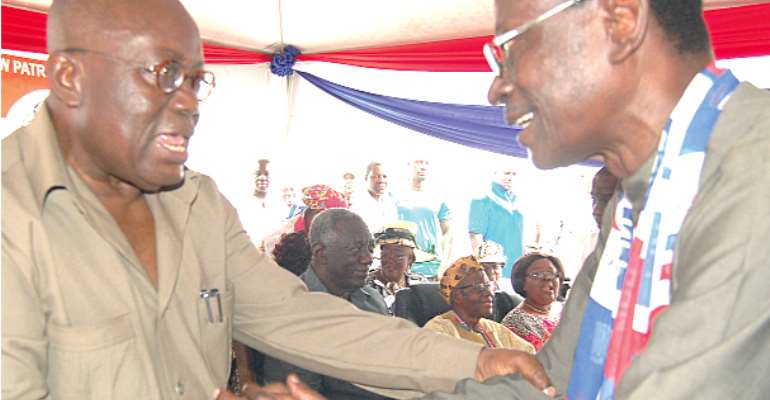 Ghana's democracy was given a boost yesterday when the National Chairman of the National Democratic Congress (NDC), Dr Kwabena Adjei, commended members of the opposition New Patriotic Party (NPP) for petitioning the Supreme Court over the 2012 presidential election results.

'It has strengthened our democracy,signalled to the world that Ghana is a unique country, educated our people on the electoral system and will lead to the sanitisation of the electoral system,' he declared at a flag-raising ceremony to mark the 21st anniversary of the NPP at the party's headquarters in Accra yesterday.

Also in attendance were former President J.A. Kufuor, the Women's Organiser of the NDC, Ms Anita de Sousa, and two other persons who have been members of the Danquah-Busia-Dombo tradition since the formation of the United Gold Coast Convention in the 1940s, 94-year-old Madam Sophia Ayokor Klu and Mr Francis Tuhir, who is in his 80s.

Humour
Just before addressing the gathering, Dr Adjei, spotting an NPP muffler around his neck, turned to Dr Mahamudu Bawumia, the second petitioner and running mate of the NPP Flag bearer in the 2012 general election, to greet him and jokingly said, 'My friend, you and I were not there', which drew applause from the audience.

He said the NDC also celebrated its 21st anniversary on June 10, 2013 but could not invite the NPP because 'we were in the middle of the pink sheets', obviously meaning that both parties were at the Supreme Court on that day.

Winner-takes-all
Dr Adjei attributed the tense situation in the country to the winner-takes-all political environment and said from now onwards 'let us share. This country belongs to all of us'.

He  pledged that whichever way the Supreme Court verdict would go on August 29, 2013, nothing untoward would happen in Ghana because as politicians, 'all of us have had lives in opposition and in government before'.

When Mr Asiedu-Nketia took the floor to speak, he commended the NPP for the occasion and described the party as being very good in opposition.

He jokingly urged the NPP to stay out of power for a longer period because the party would best serve Ghana in that position.

Unity
Mr Asiedu-Nketia noted that Ghana could only unite when there was peace and urged all Ghanaians to forge ahead in harmony.

He appealed to all political leaders and their supporters to bear in mind that 'no King will last forever' and that even if such a king stayed for long on the throne, the subjects would be fed up with him.

NPP
The National Chairman of the NPP, Mr Jake Otanka Obetsebi-Lamptey, urged  members of the party to use the occasion to take stock of the activities of the party in the last 21 years and build on the good ones.

He said the decision of the party to challenge the results of the presidential election was to raise the flag of Ghana and accelerate the pace of democracy.

The flag bearer of the party in the 2012 elections, Nana  Addo Dankwa Akufo-Addo, assured the gathering that the party was committed to the ideals of the founding fathers.

He said the NPP would not relent in implementing policies bordering on such issues as free education to the secondary level, the rule of law and a free market economy.

In a friendly gesture, Nana Akufo-Addo asked Dr Adjei to extend his regards to 'the first respondent, His Excellency the President of the Republic of Ghana, President John Dramani Mahama'.