Mugabe sworn in for new term as Zimbabwe president 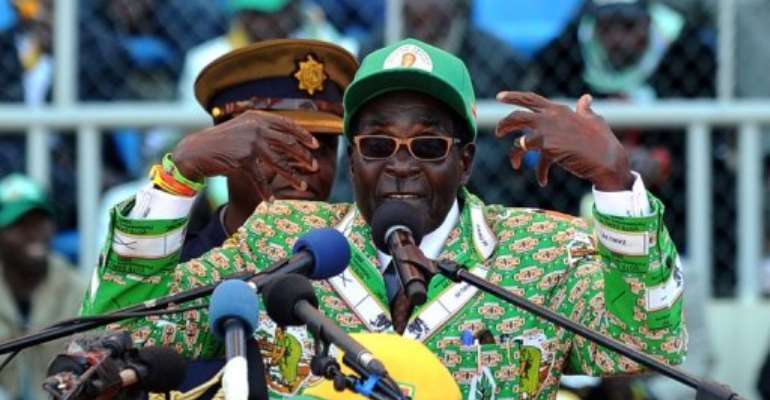 Zimbabwe's President Robert Mugabe addresses at a rally in Harare on July 28, 2013. By Alexander Joe (AFP/File)

HARARE, Zone (AFP) - Veteran leader Robert Mugabe was sworn in as Zimbabwe's president for another five-year term Thursday before a stadium packed with tens of thousands of jubilant supporters.

Mugabe, 89, pledged "to observe, uphold and defend the constitution of Zimbabwe" in an oath administered by Chief Justice Godfrey Chidyausiku, extending his 33-year rule.

Supporters clad in clothes emblazoned with the image of the man who has lead their nation since independence in 1980 filled the 60,000-seater venue, a show of force after elections many say were rigged.

Opposition leader Morgan Tsvangirai insists the July 31 vote was stolen and his party boycotted the inauguration.

Former colonial power Britain has called for an "independent investigation" into the conduct of the election, which Mugabe officially won by a landslide.

A no-show by many neighbouring leaders -- including President Jacob Zuma of regional power-broker South Africa -- did little to dampen enthusiasm.

Tanzania's Jakaya Kikwete, Namibia's Hifikepunye Pohamba and the Democratic Republic of Congo's Joseph Kabila were among those leaders who did attend.

Mugabe was greeted in the stadium by thunderous cheers and whistling when he arrived with his wife on board a military truck.

Gates to the Chinese-built stadium, the venue of Mugabe's inauguration as president in 1987, opened shortly after dawn.

The day was declared a public holiday, helping boost attendance.

"Mr Mugabe, you are one of a kind," sang a group of supporters slamming the sides of the minibus taking them to the stadium, while others waved fists as drivers honked their horns.

"It is a great day for Zimbabwe and the world will come to a standstill today," said Alfred Tome, the Harare provincial administrator and spokesman for the organisers.

A concert will include artists from South Africa, Zambia and Jamaica -- whose iconic Bob Marley played at Zimbabwe's independence event.

"Which African ever observed elections in Europe, America?" read one banner. "Africa has spoken, respect it's voice," said another.

The inauguration had been delayed after Tsvangirai challenged the poll results in a petition to the Constitutional Court that was later dropped.

The Constitutional Court confirmed Mugabe as president and declared the elections "free, fair and credible", saying the results "reflected the free will of the people of Zimbabwe."

Eldred Masunungure, a political scientist from the University of Zimbabwe, said the event was at once Mugabe's victory lap and his "last supper".

"This inauguration is being projected as the crowning of a victory of a struggle for the past 13 years against big Western powers," he said.

There is however also an "unintended meaning", he said. "It can be read as a farewell event for Mugabe. It reminds one of Jesus's Last Supper."

The electoral commission declared Mugabe winner with 61 percent of the vote, against Tsvangirai's 34.

The vote ended a shaky power-sharing government formed by Mugabe and Tsvangirai four years ago to avoid a tip into all-out conflict following a bloody presidential run-off election.

Local observers have judged the elections flawed and Western powers have raised serious doubts over the vote.

But regional and continental groupings the Southern African Development Community and the African Union were less critical.

Tsvangirai condemned the election as "a farce" and "a massive fraud" and petitioned the court to overturn the result.

Among a series of complaints, he queried the suspiciously high number of voters who were turned away from polling stations in urban areas which are considered opposition strongholds.

He also charged that his party's supporters in rural areas were intimidated by Mugabe party backers into feigning illiteracy and voting in the presence of police and election officers.

But in a surprise U-turn on Friday, Tsvangirai withdrew his petition, saying he would not get a fair hearing.

But the Constitutional Court went ahead and handed down a ruling on the case anyway.