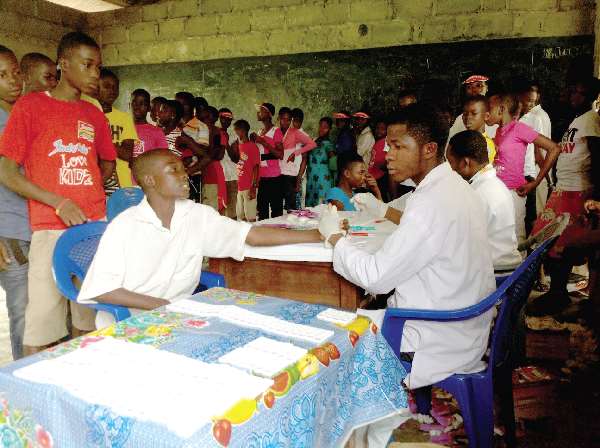 The location is Ve-Gbodome in the Hohoe South Constituency in the Afadzato South District in the Volta Region.

It has a naturally pure and rich environment, with a soothing greenery that provides a natural therapy that enhances longevity of life and a remedy from stress and  depressing situations.

As impressive as these physical features of the area may be, they have, over the years, subdued a very delicate matter that underpins growth and sustainable development in the 21st century - Education.

Over the years, there has been continuous decline in the number of pupils who get enrolled in basic schools and who are able to complete school.

Regrettably, there are a host of alumni of the various schools and institutions of learning who only return to their respective schools for official documents such as transcripts, testimonials, results slips, among others.

But Madam Cecilia Fiaka is different — she is now armed with some ammunition to battle this developmental problem of high school dropout rate being experienced in the area.

She hails from Ve-Gbodome and attended school there but is currently living in Accra, where she works with Stanbic Bank Ghana Limited.

Madam Cecilia Fiaka, the woman who initiated the agenda for change in the area.On a number of occasions when she visited her village, she got troubled by the number of young girls aged between 13 and 14, who had become victims of teenage pregnancy and young boys within those age brackets who had taken to smoking Indian hemp.

As a personal initiative, she recollects calling on the police to put some fear into the boys who, quite often, congregate at locations to do their 'own thing'.

Some went into the bush and for days did not return home.

The first step, she said, was to contact the Hohoe Municipal Education Directorate for statistics on the number of pupils who were admitted to basic schools in the area and how many stayed on and completed.

That showed that in the period under review, 1,146 pupils dropped out of school, following which the Nneka Youth Foundation carried out a number of surveys among the youth of the area which gave clear indications of the developmental problems of the area.

Based on that, Madam Fiaka said, the foundation wrote a number of proposals to institutions to partner it in bringing real meaning to the lives of the young ones in the village.

She said with satisfaction and pride that Stanbic Bank, Shoprite, among others, came on board to support her noble quest.

Last year, a youth development vacation training camp was held for 400 youth from 10 communities in the area. Resource persons from various professions engaged them on developmental issues that had a direct bearing on the development of the youth of the area, such as social vices, career counselling, grooming and ethics, with the flagship programme being a talk show entitled, 'You Can Be the Best'.

And that intervention seems to be paying off, with this year's vacation camp attracting over 1,000 youth from 44 communities drawn from the Afadzato South District.

The Daily Graphic sampled the views of some parents, teachers, chiefs and opinion leaders in the area, who confirmed that the intervention was in no small way making a positive impact on the youth of the area.

This year's camp is on the theme: 'The World Changers Camp', and the two-week programme, during which the participants will be fed, taught, challenged and given medical screening and treatment free of charge, seems to be attracting a high level of enthusiasm among the participants.

The programme is estimated to cost GH¢70,000 but it will require more support to make a greater impact.

Esi Amevi, a 16-year-old victim of teenage pregnancy, told the Daily Graphic that if she had previously had some of the education she had been privy to during the camp meeting, her fate would have have been different from what it is presently.

But that notwithstanding, she was prepared to make the best out of the situation.

Fourteen-year-old Seth Wotoadzi, said with some confidence, 'I am now bold and can achieve whatever I set myself to achieve. My goal is to become an inventor to help find solutions to the needs of people.'

The vision of the Nneka Youth Foundation is best encapsulated in the quotation that I picked from my interview with Madam Fiaka: 'Smarter to raise healthy children than to repair damaged adults.'