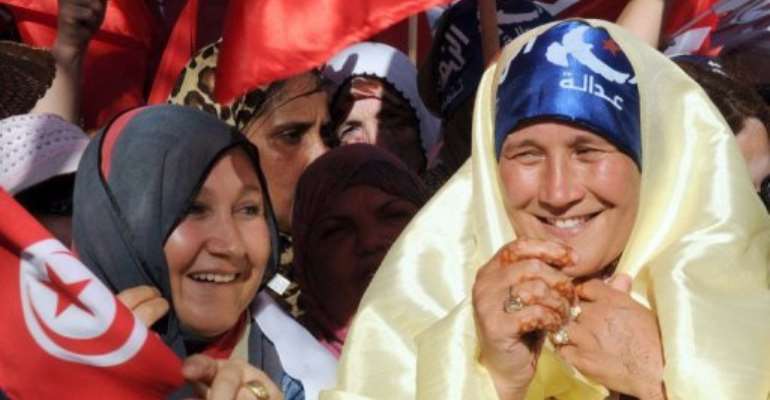 Ennahdha party supporters at a rally on Habib Bourguiba avenue, in Tunis, on August 13, 2013. By Fethi Belaid (AFP/File)

The talks, which again showed no sign of progress, come amid turmoil and bloodshed in nearby Egypt, following the army's ouster of Islamist president Mohamed Morsi last month, and with anti-government protests planned across Tunisia this weekend.

Union representatives met members of the National Salvation Front (NSF), a loose coalition of opposition parties, who once again ruled out any dialogue with Ennahda while the coalition it leads remains in power.

"The opposition considers that it is not a question of engaging in dialogue, as Ennahda has not announced the resignation of the government and the formation of a government (of technocrats) headed by an independent," UGTT secretary general Houcine Abassi told private radio station Mosaique FM.

Shortly afterwards, the UGTT said that a planned meeting between Abassi and Rached Ghannouchi, Ennahda's veteran leader, had been postponed until Thursday.

Their first meeting last week failed to yield any substantive progress, with the Islamists refusing to give up the power they say they earned in 2011 elections.

Maya Jribi, a leader of the opposition Republican Party, defended the NSF's demands.

"This government is incapable of ensuring security... Ennahda must realise the gravity of the situation and the need to accept a national salvation government," she told Shems-FM radio station.

"On this basis a dialogue can be launched and we can look at how to develop the (new) constitution," Jribi added.

As well as the formation of a non-partisan government, the opposition has called for the dissolution of the National Constituent Assembly, which, nearly two years after it was elected, has failed to promulgate a new charter.

Ennahda, for its part, is proposing a broad-based national unity government and fresh elections in December, while rejecting calls for the dissolution of parliament, where it occupies the largest number of seats.

Abassi's UGTT, which supports the formation of a non-partisan government but also rejects the dissolution of the assembly, has been central to the negotiations since it was asked by the speaker of parliament to seek a compromise between the Islamists and the opposition.

The NSF has called for nationwide demonstrations, starting on Saturday.

They come a month after the assassination of opposition politician Mohamed Brahmi.

Islamist Prime Minister Ali Larayedh warned on Tuesday against any attacks on state institutions during the protests.

The opposition accuses Ennahda of mismanaging the economy and failing to improve living standards.

The criticism is similar to that levelled against Egypt's Islamist president Mohamed Morsi by the millions of protesters who took to the streets before his July 3 overthrow by the army.

Ennahda has also been accused of being too soft on radical Islamists, who are blamed for murdering Brahmi and Chokri Belaid, another prominent secular politician whose assassination in February brought down the first Ennahda-led government.

The Islamists accuse the opposition of trying to repeat the events in Egypt, where an elected president was ousted in a coup that has been followed by deadly violence and the detention of Islamist leaders.