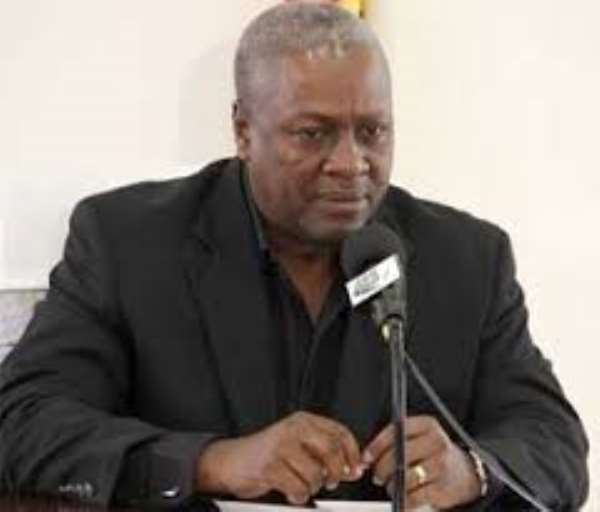 President John Dramani Mahama on Monday gave the assurance that government would review the structures at the Domestic Violence and Victim's Support Unit (DOVSU) of the Ghana Police Service to empower them to work effectively.

He said issues such as rape, defilement and violence against women were equally serious like murder, drugs and other criminal activities and, therefore, needed a serious approach to stem the growing phenomena.

President Mahama gave this assurance when various women groups and organizations called on him at the Flagstaff House, Kanda.

Their visit at the Presidency formed part of President Mahama's resolve to engage all stakeholders to map out workable strategies for the socio-economic development of the country in the coming years.

He has so far met the media, civil society organisations, members of the creative arts and would next week meet all vulnerable groups for the same purpose.

The women groups, led by Nana Oye Lithur, Minister for Gender, Children and Social Protection were made up of advocacy groups, empowerment groups, women in academia, market women, women in politics, Queen mothers and women leaders in the religious sector.

They highlighted issues connected to education, training and employment, violence against women and children, discrimination against women and participation and representation in the political dispensation of the country.

President Mahama said the growing social problems of the country needed multi-sectoral approach to surmount, and called on all women organizations to step up their educational programmes to stop negative practices that were meted out to women.

On women participation and representation in politics, President Mahama said much as government had worked hard to appoint more women to take up responsible positions in the country, their participation at the grassroots were abysmal as the figure kept dwindling on annual basis.

He mentioned key positions such as the National Commission for Civic Education, Attorney General, Human Rights and Administrative Justice, Ghana Prisons Service and the Chairperson of the Council of State as some of the positions that were occupied by women and appealed to them to engage more discussions that would whip up their enthusiasm.

The President reminded the Gender, Children and Social Protection Minister to create a database on employment, poverty and participation of women as that formed part of her mandate to highlight on pertinent issues in the country.

Mrs. Edna Kumah, Executive Director of African Women Lawyers Association (AWLA), who spoke on the security on women and girls, called for the relaying bills and Acts that were laid in Parliament but could not be passed to ensure perpetual protection for women and children who formed the majority of the vulnerable in society.

He added: 'Government will continue to see the development interventions the Church has over the years rendered as complementary and not a competition.'

President Mahama made this call when the Reverend Father Campbell led a delegation from the Christ the King Parish to pay a 'neighbourly' visit to the Flagstaff House, Kanda.

President Mahama lauded the Catholic Church for embarking on educational, health and agricultural projects and said the government would continue to partner it in uplifting the people from their development challenges.

He also noted the role of the Church in the protection of human rights, stressing that some times when society was afraid to speak up on matters of national significance the Church took the bull by the horns in stating its position on the issues.

President Mahama noted that the government's quest to deepen diplomatic relations with the Vatican recently resulted in the appointment of an envoy to represent the interest of the nation there.

The President expressed the hope that the new Pope would continue in the traditions of his predecessors and bring about some more vibrancy in the activities of the Roman Catholic Church.

He commended Father Campbell for his various charitable works in support of the needy and the vulnerable in society including soliciting assistance to the Leprosarium and the Children's Hospital.

Father Campbell indicated that the Parish was happy to have a distinguished neighbor and enumerated activities by the Church aimed at edifying the spiritual upbringing of its flock.

He also lauded President Mahama for supporting the Church to take care of the needy in the basic, secondary and tertiary institutions, orphanages and lepers in the country.GNA