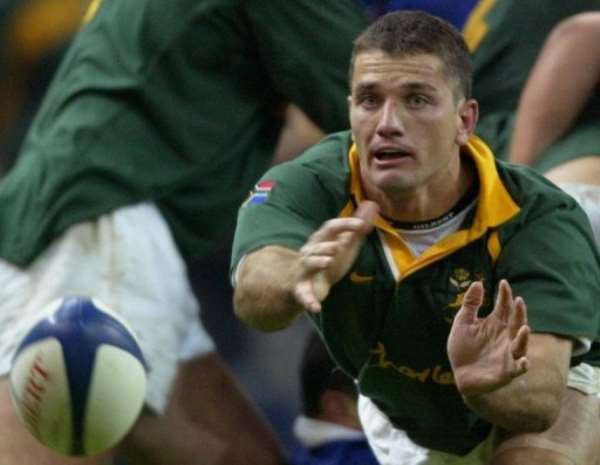 "I realise every day could be my last," the South African rugby hero said.

"It's been a rollercoaster from day one and I know I'm on a deathbed from now on," he told the BBC in an interview.

It is incurable and almost always fatal.

The scrum-half was given two to five years to live when he was diagnosed in 2011. Today the 42-year-old slurs when he speaks, is wheelchair-bound and so weak he can barely lift food to his mouth.

But the star player, who was part of the winning team in the 1995 Rugby World Cup and captained the Springboks in the tournament four years later, is at peace.

"I've had my highs and I have had my lows, but no more. I'm a firm believer that there's a bigger purpose in my life and I am very positive, very happy," he said.

Van der Westhuizen scored 38 Test tries in 89 appearances in the green and gold by the time he retired in 2003.

But he has drawn equal attention off the field, after a sex tape of his cocaine-driven romp with a prostitute was leaked in 2009. The scandal cost him his marriage and a lucrative commentator contract with Johannesburg-based satellite sports channel SuperSport.

"I led my life at a hundred miles an hour. I've learned that there are too many things that we take for granted in life and it's only when you lose them that you realise what it is all about," he said.

But the former player said he is more frank these days.

"I can now talk openly about the mistakes I made because I know my faith won't give up and it won't diminish," he said.

"It's only when you go through what I am going through that you understand that life is generous."

He currently spends much of his time with his two children, Jordan, 7, and Kylie, 5.

Van der Westhuizen has also set up the J9 Foundation to promote awareness around the disease.