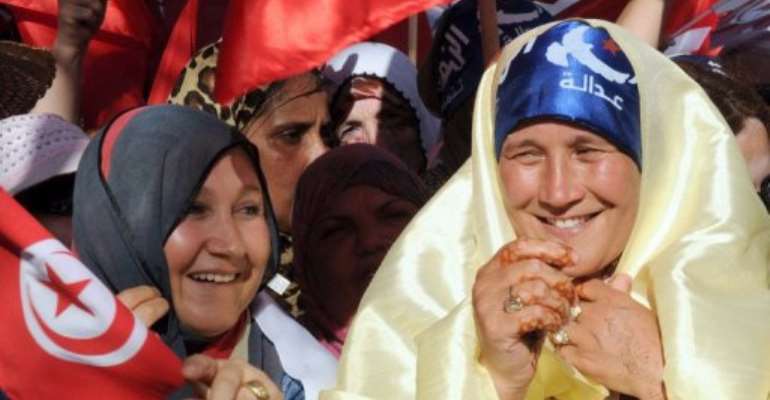 Ennahdha party supporters at a rally on Habib Bourguiba avenue, in Tunis, on August 13, 2013. By Fethi Belaid (AFP)

TUNIS (AFP) - Tunisia's powerful UGTT labour union on Wednesday resumed mediation between the ruling Islamist party and the opposition in a bid to end the political crisis plaguing the country.

The talks come amid political turmoil and bloodshed in nearby Egypt, following the army's ouster of Islamist president Mohamed Morsi last month, and with anti-government protests planned across Tunisia this weekend.

At midday, union representatives received members of the National Salvation Front (NSF), a loose coalition of opposition parties, the UGTT said on its Facebook page.

In the afternoon, union chief Houcine Abassi and the leader of the ruling Islamist Ennahda party, Rached Ghannouchi, are due to hold talks for the second time in a week, after their first meeting failed to yield any substantive progress.

The two sides have expressed reluctance to compromise on their respective positions, nearly a month after the July 25 assassination of secular opposition MP Mohamed Brahmi, an attack blamed on Muslim extremists.

Ennahda has proposed a broad-based national unity government, while rejecting opposition calls for the formation of a technocrat administration and the dissolution of the National Constituent Assembly, where the Islamists occupy the largest number of seats.

The UGTT, which supports the formation of a non-partisan government but rejects the dissolution of the assembly, has been central to the negotiations, since it was asked by the parliamentary speaker to seek a compromise between the Islamists and the opposition.

The NSF, meanwhile, has called for nationwide protests, starting on Saturday and dubbed the "week of rage," to demand that the government step down.

The opposition accuses Ennahda of mismanaging the economy and failing to improve living standards, with poor social conditions seen as a driving factor behind the 2011 revolution.

The ruling Islamists have also been sharply criticised for not doing enough to rein in Muslim extremists, blamed for murdering Brahmi and another prominent secular politician, Chokri Belaid, whose assassination in February brought down the first Ennahda-led government.