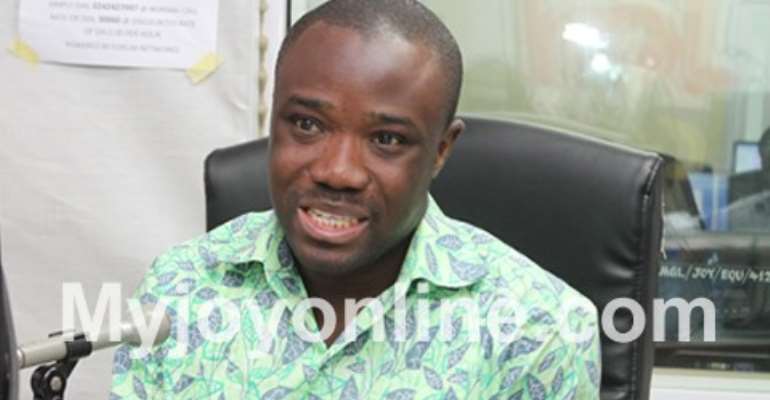 Deputy Information and Media Relations Minister, Felix Kwakye Ofosu, has accused Myjoyonline.com of distorting comments he made on what may have occasioned a circular from the US Embassy warning American citizens of potential political violence in Ghana.

We had reported him as saying the actions of NPP supporters could form the basis for the US alert because the opposition party's supporters outside the country had held protests creating “the impression that there was some major conflagration going on in Ghana.”

But he denounced the report in a rejoinder issued Wednesday.

Below is the full rejoinder issued Mr Kwakye Ofosu.

RE: NPP COULD BE THE CAUSE OF US EMBASSY WARNING

My attention has been drawn to a publication on myjoyonline.com which is also reproduced on peacefmonline.com in which the author attributes certain statements to me as having been said on Metro TV's Goodmorning Ghana program on Tuesday, 20th August, 2103.

In the said publication I am alleged to have said that the utterances and activities of the NPP in the aftermath of their petition to the Supreme Court sent signals to the U.S that all was not well with the political climate of Ghana hence the US embassy warning.

I wish to state that at no point in my submissions on the aforementioned program did I say that the U.S Embassy warning to its citizens in Ghana was or could be the result of the conduct of NPP supporters.

On the contrary, I reiterated government's position on the matter by indicating that the warning to U.S citizens in Ghana was a routine communication to Americans living in various countries to update them on current happenings in those countries which should not create any alarm.

I also assured viewers of the preparedness of the country's security agencies to provide security for all Ghanaians and people living in Ghana after the Supreme Court ruling.

I then proceeded to state that we as Ghanaians have demonstrated commitment to deepening the democratic system of governance and have in the process carved an enviable reputation for ourselves as a stable, democratic country and do not deserve to be ranked amongst unstable countries.

I concluded by expressing the view that foreigners especially those outside Ghana may not have the same perspective we have on our politics. They may also not have a full appreciation of the dynamics of our politics and hence may take things they hear being said about the country at face value. I indicated that over the last three years there has been an upsurge in the use of violent rhetoric by the leaders of the NPP as well as significant political mobilization on their part in the wake of the petition filed at the Supreme Court.

I recounted how at rallies and demonstrations organized by the NPP both within and outside Ghana in support of their petition, a conscious effort has been made to attack and run down several state organizations such as the Electoral Commission, the Supreme Court (for which reason no less a personality than the General Secretary of the NPP was convicted for intentional criminal contempt last week), the Police, and the President. I singled out the demonstration organized by a handful of NPP supporters when President John Mahama visited the U.K recently and noted the unprintable abuses and insults hurled at him by the demonstrators and indicated that acts like these could send wrong signals to the international community and could project us in negative light as an unstable country. I urged Ghanaians to desist from that practice as there was nothing to be gained from painting one's Nation black.

These statements are true and can be attested to by anyone willing to do an honest assessment of what has happened in this country over the last three years.

How the above could be construed to mean that I have said that the U.S Embassy warning to its citizens could have been the result of NPP behaviour completely befuddles me. It is even more disturbing when one considers the fact that the author of the story attached a voice clip of what I said on the program, which voice clip clearly belies the attributions made to me.

In the light of the obvious inaccuracy in the reportage as pointed out in the foregoing, I am by this rejoinder demanding a retraction of the said publication or the production of a headline and story that accurately reflect what I said on Goodmorning Ghana.

I trust that in the spirit of fairness and professionalism, this demand will be heeded.

FELIX KWAKYE OFOSU
20TH AUGUST, 2013
For the records, below is the full transcript of what Mr. Kwakye Ofosu said on Metro TV.

“…but I think that there is no cause for alarm but again rightly I think that you know sometimes foreigners do not have the benefit of having the same context that we have; they do not, they are not too familiar with our political dynamics and so they tend to take everything at face value. I mean for over two years, getting to three years, we have been put under siege, constant violent rhetoric coming from a section of our political divide. Because these things get online, they are read outside and so like I indicated because they are not here and even if they are here they do not appreciate our dynamics too well, they tend to it to mean that there is some impending implosion. Even in the aftermath of this Supreme Court petition, when the petition was laid some political mobilization has occurred around it around capitals in the western parts of the world, we have seen demonstrations, indeed when his Excellency went to London, we saw how a handful of NPP supporters came and hurled abuses at him and carried placards that created the impression that there was some major conflagration going on in Ghana. There have been demonstrations held in London, in Dublin, in the US, in other major European capitals so people see these things and think immediately that there must some confrontation about to happen in Ghana so we must understand that there are consequences for some of the actions that we engage in and that there is no benefit to be derived in painting your own nation black in front of others. If there is an electoral dispute why do you go ahead and make claims that have no bearing at all on the case at hand but that seek to project your country in negative light? There has been a conscious effort to run down our agencies. At some of these rallies, they have attacked the Electoral Commission, some have even attacked the Supreme Court, some have attacked the police, some have attacked the executive, the president and made him appear like some dictator who is stifling people and oppressing people and all that. I think that those who feel affronted may want to avert their minds to some of these things and resolve that going forward as a nation we are not going to conduct ourselves in this way because Ghana doesn't deserve to be ranked amongst nations that are unstable.”