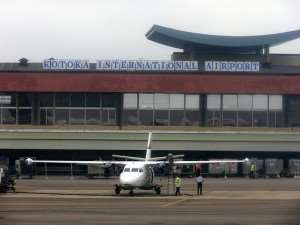 Renaming Ghana's Airport after Kotoka has been widely discussed and written about by many concerned Ghanaians. Others have kept mute for fear of being branded tribalist. Most of us were children when the Airport was renamed Kotoka International Airport. As we are now adults, it is important to discuss the events that led to the renaming of the Airport. Was it wise and necessary to ignore Nkrumah who built the Airport, and name it after the one who overthrew him?

Lt. General Kotoka died on 17th April 1967, a little over a year after leading a group of military officers to overthrow the legitimate government of Dr. Kwame Nkrumah on the 24th February 1966.

On the 17th of April 1967, a failed coup bya group of junior officers from the reconnaissance regiment in the Volta regionled to the killing of Kotoka by Lt. Moses Yeboah after heavy fighting. The latter and one other colleague were later arrested and tried by a military tribunal. They were found guilty and were executed.

The GhanaInternationalAirport was renamed Kotoka International Airport in his memory, for the simple, unrealistic and funny reason that he was killed at a spot which is now part of the forecourt of the Airport. His statue stand at that point. It is absurd and totally irresponsible to name a nation's Airport after a man who helped in overthrowing a legitimate government, and shamefully dying in an attempted abortive coup by junior officers.As a Lt. General if he could not stand the might of junior officers, what makes him a hero to be honoured?

Many important Airports are named after great personalities and heroes and not coup-makers. There is Houphet-Boigny Airport in Abidjan and J.F. Kennedy Airport in New York. It is also believed that America got its name from the heroic explorer, Amerigo Vespucci. The list is endless. AmerigoVespucci (March 9, 1454 - February 22, 1512) was an Italian explorer, financier, navigator and cartographer who first demonstrated that Brazil and the West Indies did not represent Asia's eastern outskirts as initially conjectured from Columbus' voyages.

The inappropriate imposition of Murtala Mohammed's name on Nigeria's Airport can be likened to that of Kotoka.MurtalaMuhammed represents one of the greatest tragedies that has befallen Nigeria. An unintelligent, ill disciplined, uncharismatic, unprincipled and nondescript failed soldier, Kwame Nkrumah led Ghana to attain Independence from the British and subsequently became the first Ghanaian President.

Despite his failures and shortcomings, his government initiated many development projects including factories and many industrial holding corporations. He built the Tema Township from the scratch and linked it with a motorway to connect to Accra.

He built the TemaHarbour and the Akosombo dam. Kwame Nkrumah established the Ghana Education Trust(G.E.T.) fund which saw the spread of great constructions of permanent buildings for secondary schools, specialist and training colleges. Two universities were built in Cape Coast and Kumasi. Ghana's major Airport in Accra was also built by Kwame Nkrumah.

This is the focal point of the article.As was usual with Nkrumah, the Accra Airport was planned as a gateway to Africa and not just to Ghana. It was meant to have the longest runway of any airport in Africa and equipped with the most modern technology at the time. Nkrumah didn't do things in halves.

Why then should the Airport be named after Kotoka instead of the man who built it and also took major steps in Ghana's development? Dear reader, this article is not about tribalism but pure intellectual discussion geared towards further debate about what is good for Ghana's development concerning frank and fearless sharing of opinion.